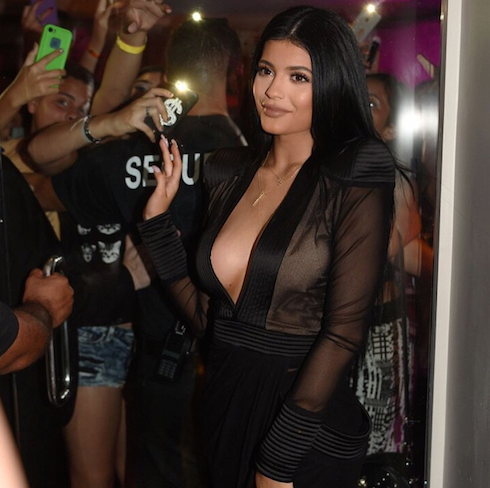 17-year-old reality TV star Kylie Jenner is leaving Keeping Up With The Kardashians in favor of new show Kingin’ With Tyga.

Kylie has long toyed with the idea of leaving the Kardashian brand behind and striking out on her own; as recently as three weeks ago, she was reportedly deep in negotiations to start her own reality program, tentatively titled The Kylie Khronicles.

The lure of her own co-starring venture has proven to be too strong, though, and she’s using the MTV-based Kingin’ With Tyga as a platform to launch her own future ventures. Among them? Announcing her intentions with Tyga, right around the time of her 18th birthday. Kingin‘ premieres on July 24th, and Kylie Jenner turns 18 on August 10th.

According to an insider, the whole shebang is basically a done deal:

Once Kylie is 18 years old, she has no intention of filming Keeping Up With The Kardashians anymore. She is sick of her mother Kris, and all of the drama that comes with the Kardashians. Kylie thinks that she and Tyga can build their own empire – between his businesses, her endorsements, their reality TV show, and both of their music. Kylie already changed her username on Instagram to ‘King Kylie’ to start promoting their show.

Here’s the first promo clip for the show, just released by MTV:

Kylie doesn’t appear in the promo at all, which is a bit of a head-scratcher. Apparently, that omission is by design–it’s all part of the roll out:

Unfortunately, because it premieres before she turns 18, they do not want to show that she is his girlfriend in the beginning and will wait until she is an adult to work it in. It will be great for ratings and perfect timing to have their first kiss on-air. It will also be great exposure for her as an upcoming artist.

One person who’s not thrilled about Kylie Jenner leaving the protection of the Kardashian flock is Caitlyn Jenner. Kylie was part of the Swiss nightclub brawl that Tyga started this weekend, which also involved a gun. While some observers have shrugged the incident off as a simple part of growing up and testing boundaries, Caitlyn disagrees.

“Caitlyn panicked when she heard Tyga had a fight in Geneva and a gun was drawn. It brought her to tears because she fears for Kylie’s safety,” a source close to the family reported. “Cait doesn’t know the specifics of what went down [but]…it’s becoming apparent to her that this relationship of theirs could be a problem and she wants to talk to Kylie.”

The source continued, “Caitlyn wants Kylie to home immediately so she can have a heart to heart with her and straighten her out. Kylie could have been seriously hurt or worse.”
(Photo credits: Kylie Jenner via Instagram)

TLC Outdaughtered Season 2 update: The Busbys return and the quints are crawling