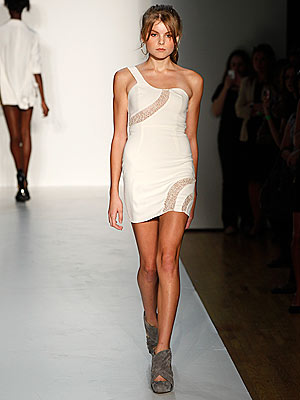 Tonight on RHNJ Danielle’s wispy daughter Christine Staub (who recently signed IMG model) and Teresa’s blinged-out baby Gia (who was asked to walk a runway for Elle Magazine) take over New York Fashion Week. When the Jersey girls hit New York, everyone else should have just packed up and went home, because the show was over.

Danielle’s desperate vicarious joy for her daughter’s burgeoning runway career is . . . creepy to say the least, but she’s also hedging all bets of the family’s survival on Christine’s shoulders. This is the only income opportunity for Danielle and her girls besides the Housewives salary (which is a pittance when one wants to live in a mansion) and now, book profits. At some point last episode Danielle was exclaiming that maybe now they could move into a nice house (the one they’re currently in is from Danielle’s broken marriage and is listed as a short-sell.) Danielle has also noted that providing for herself and her daughters is a day-to-day struggle, but don’t feel any pressure, Christine!

The young Miss Staub is making it work though, and on tonight’s episode she struts her stuff on the runway during Rebecca Minkoff’s show. IMG doesn’t mess around, they weren’t just hoping for exposure from the show, they really saw something in Christine. She looks like a real deal model, not a promotional gimmick.

Strut it girl! And don’t let your mother suck the life out of you.

Speaking of stage moms, another Jersey youngster made it to fashion week: Gia Giudice. After watching Danielle Staub mentally try to claw her way into her daughter’s body / steal her spotlight with such veracity, Teresa Giudice seems extremely laid back. Her oldest daughter, 8-year-old Gia, is also ready to strut it at Fashion Week, for Elle Magazine. Gia’s a cute, sassy kid, but unlike Christine’s circumstance, this case does kind of smack of name-recognition. Not that she doesn’t have the skills. Gia’s definitely being groomed to take over the world at some point, and her mom’s turning out to be a pretty fabulous role model, with a hot-cookbook, honest blogging (with a hint of sass, like we like it), and selling catch-phrase t-shirts and frou-frou hair clips. Teresa Giudice may be a bit scatter-brained and foggy headed at times, but she’s no dummy.

Below are clips of the Real Jersey girls pre-runway:

Gia gets a little emotional about her dad Joe’s offhand joke: