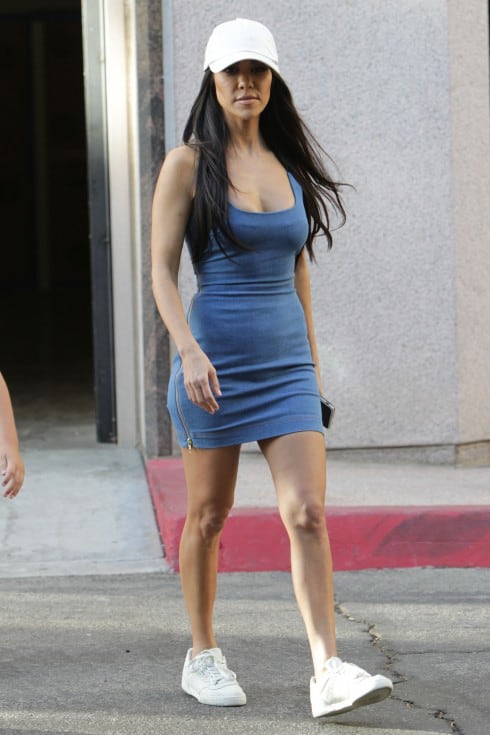 It’s been a hot minute since the last good Kourtney Kardashian pregnancy rumor, and the Kardashians are nothing if not savvy about stealing the spotlight. So it kind of makes sense that the latest bit of gossip would come straight from the 38-year-old herself, via a Kourtney Kardashian pregnancy rumor gone wrong (or “wrong,” depending on whether or not you believe it was really an accident).

The context comes from a just-published interview with Kourtney in Grazia Daily, the official fashion arm of the UK’s Daily Mail. The interviewer definitely does not bury the lede: the interview is ostensibly to promote Kourtney’s latest clothing line, but the writer kicks her article off with the joke, thus ensuring both viral infamy and no one reading past the third paragraph.

‘I’m pregnant,’ declares Kourtney Kardashian, with all the gravitas of a newscaster announcing World War III.

My heart skips a beat. It’s only been a few weeks since news broke that Khloé and Kim Kardashian and Kylie Jenner are all expecting (Kim via a surrogate). Surely even momager Kris Jenner couldn’t have engineered a storyline where Kourtney, the oldest sister, gets in on the act?

My willingness to believe her – she reassures me she’s joking after an uncomfortably long pause – is testament to just how much we’ve come to expect from the Kardashians over the last decade. In a world where we’ve seen everything from Kim snapping selfies on the way to dropping Khloé off in jail to Kourtney literally giving birth in front of the cameras, it seems there is nowhere these women won’t go in the name of entertainment.

That is effective arrangement! (The first mention of Kourtney’s latest fashion endeavor doesn’t come until the twelfth paragraph, in case you were wondering.) And, based on that arrangement, it sure does look like Kourtney was just having a little fun with the pregnancy outbreak currently ravaging her family.

However, shortly after the interview was published, Kourtney took it upon herself to offer a different interpretation of events on Twitter. According to her, the Kourtney Kardashian pregnancy joke came when the interviewer asked Kourtney for a “crazy rumor” she’d heard about herself, and that pregnancy was the natural pivot:

I see online that I said I was pregnant in an interview, but that was completely taken out of context.

The interviewer asked me “What’s a crazy rumor that you’ve heard about yourself?” and my answer was…”I’ve heard that I am pregnant.”

On its surface, that’s really kind of a curious response on Kourtney’s part. After all, the interviewer explains that Kourtney said she was joking, so there isn’t any ambiguity in the original article itself. It only makes sense when you remember that it’s the tabloid interpretation of the interview–”Is Kourtney Kardashian pregnant?”–that Kourtney is really responding to. Which is another way of ensuring, via rewrites and brand-new articles about her tweets, that the aforementioned spotlight stays on her.

On a related note, sportsbook BetOnline is offering a variety of prop bets related to Kim, Khloe, and Kylie’s babies. Among the more entertaining offerings: +300 if they all have girls; +450 if Tyga tweets congrats to Kylie; +240 if Khloe’s kid weighs under seven-and-a-half pounds; and +1400 if Kim’s baby’s name begins with K. No word yet on whether they’re taking bets related to Kourtney’s alleged pregnancy.

Did LeAnn Rimes get engaged to Eddie Cibrian?