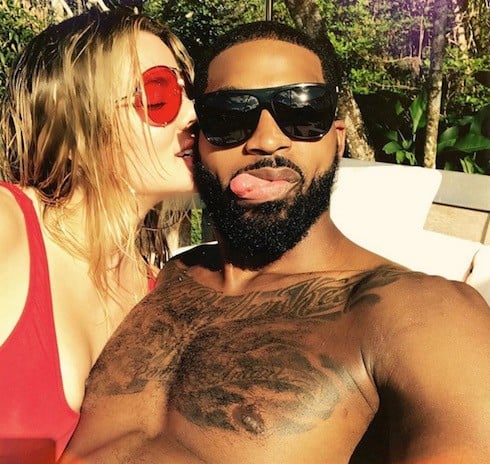 Its been a summer of flip-flops where Khloe Kardashian pregnancy rumors are concerned. In June, the story was wedding bells between herself and Tristan Thompson, with kids to follow approximately eight months later; July brought tales of relationship woe. Now that we’re deep into August, the gossip has flipped babyward once more, with Kim Kardashian allegedly intervening to help get Khloe pregnant.

The latest from Life & Style claims that Kim, whose adventures in surrogacy are supposedly progressing nicely, is trying to persuade Khloe to share in the fun. According to their insider, “[Khloé] has been trying to get pregnant with Tristan for more than four months but so far, no luck.” (Devotées will recall that Keeping Up With The Kardashians devoted a scene to Khloe’s fertility issues in its most recent season finale.) To help, “Kim has been pushing Khloé to hire a surrogate”; she’s also, if you’ll forgive the visual, “been flooding Khloé with lots of information.”

“She gave Khloé a list of surrogate contacts,” the insider went on. “Kim also has a team of lawyers, nutritionists[,] and physicians keeping her surrogate healthy, and she wants to put Khloé in touch with them.”

In related Kardashian surrogacy news, a new report from In Touch appears to have it on good authority that Kim wants to start filming a KUWTK spin-off featuring she and Kanye’s surrogate. The headline claims that Kim “is filming” the show, but the article itself only says that Kim is “trying to nab” a surrogacy spin-off; the primary hiccup is that Kanye refuses to participate or let North and Saint appear on camera. But Kim thinks such a show would be good for “other women who are struggling with fertility issues.”

Adds that report’s insider, “Kim’s upset but is confident that she’ll get her way in the end. She always does.”

So, on the one hand, good on Kim for trying to raise awareness? But, when you look at the reports side-by-side, it’s hard to see her recruitment of Khloe–to the extent that any of this is true–as anything other than leverage to use on Kris & the rest of the powers that be at E!. And let’s not forget that Kylie Jenner is about eleven months away from becoming the family’s first billionaire. (She’s also only fifteen years away from becoming the youngest president in American history–#Kylie2032; it’s totally a thing.) If Kim gets a surrogacy spin-off, she can write off the surrogate’s fee and all the other costs of pregnancy as a business expense in her last-ditch attempt at keeping Kylie off the top of the Kardashian family power chart.