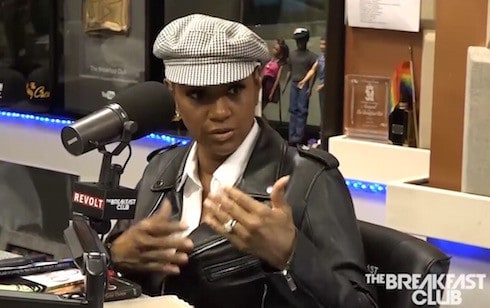 The latest season of Basketball Wives might have come to a close with an especially tumultuous reunion special, but the fallout from Jackie Christie and daughter Takari Lee’s estrangement continues unabated. The latest development comes from Jackie, who went on The Breakfast Club to talk about Sexual Relations, her new book with husband Doug, but wound up spending a whole lot of time talking about how things got to be so messy with Takari, and wound up discussing her own net worth in particularly morbid fashion.

Of Takari, Jackie says she still believes that outside forces have poisoned her daughter against her–though she also sounded sad when describing her own role in Takari’s early life. “When I grew up and was successful, I made sure [my children] had everything they needed and wanted,” Jackie explained. “And I guess I was a little too overprotective, and gave them a little too much.”

The most eyebrow-raising moment of the interview came when Jackie revealed how much money Takari allegedly stands to inherit in the event of her parents’ deaths. “If Doug or I were to pass, Kari would get eight million dollars,” Jackie said. She added, “Maybe [Takari] wants me to pass.”

When Charlemagne asked Jackie what her other children–Chantel and Doug Jr., both of whom are Doug and Jackie’s biologically–would recieve, she said, “Eight,” and added, “It ain’t a lot,” before trailing off.

Here’s Jackie’s full Breakfast Club interview (skip ahead to the 6:15 mark for the Jackie Christie net worth comments):

According to contract tracker WhatIfSports.com, Doug Christie made a grand total of $55,937,071 during the first twelve years of his NBA career. The site doesn’t list Doug’s 2005-06 Dallas Mavericks contract or his 2006-07 contracts with the Los Angeles Clippers, for whom he played a cumulative 14 games. It looks like Doug played for the league minimum for those two stretches–hardly chump change, but not a lot when you’re talking about career earnings in the mid-eight figures.

So a collective $24 million inheritance is hardly out of the question for the couple. And, though her point was clear, presumably Jackie meant that she and Doug’s children will inherit a collective $24 million when both their parents die? Regardless, it was an especially somber moment in an interview ostensibly about how to keep the flames of passion burning brightly after years and years of marriage.

As for whether Jackie will ever ask Takari to join her in front of the Basketball Wives cameras…well, don’t hold your breath:

I’m not interested in any way, shape, or form in entertaining this bogus behavior between the two of them, anymore. I really feel bad that the audience has to be bamboozled to believing all of this nonsense. I love my daughter, I’ve always made that clear, I say it throughout the show. I’ve always defended her, regardless of whatever’s going on. And after this, I am done discussing my daughter. These are not clinical doctors that can do anything. [Evelyn] is a woman that is just choosing to use [the situation] for evil intent and it’s just not cool. I feel like [Evelyn] will get over it once the season has ended and she’s had her 15-minutes.

Basketball Wives Season 7 is expected to begin filming this fall. Casting decisions have yet to either be announced or leak.