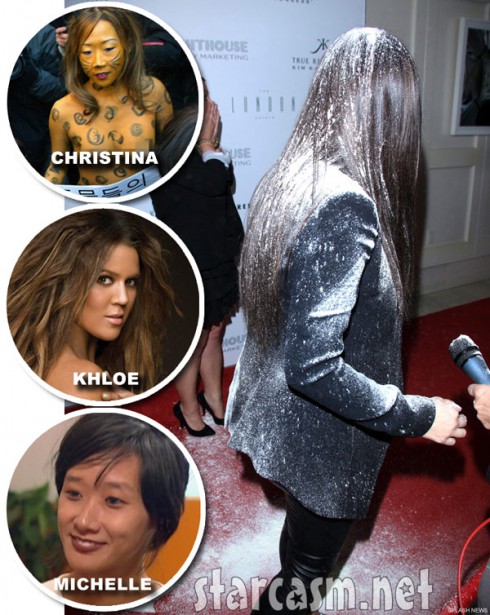 The Flourgate plot thickens! In case you missed it, Kim Kardashian was on the red carpet speaking to reporters at a launch event for her True Reflection perfume when a woman approached her from behind and dumped a bag of flour on her head as she yelled “Fur hag!”

The woman was detained but released and initially Kim indicated she would not be pressing charges. Most people assumed People for the Ethical Treatment of Animals (PETA) was responsible for the stunt, but a spokesperson for the organization told TMZ in a statement, “It was not [us]. We were given the video by an anti-fur activist on the scene. PETA has tried everything from polite letters to public protests, but Kim Kardashian has not been moved by the news that animals are beaten, electrocuted, and even skinned alive for real fur garments. Whoever threw that flour may reach her when our polite appeals did not.”

Since that time everything we thought was true has been turned on its ear! Kim Kardashian is pressing charges now, and the flour bomber turned out to be Christina Cho, an award-winning PETA activist! Here’s what Kim told E! News yesterday:

“Now that I think about it and had some time to digest it, I think, ‘What if that was some other substance? What if that person had a dangerous weapon?’ It’s scary. And what’s even scarier is this woman acted as if she was a part of the press. She just came out of nowhere! And so we are definitely changing things up a little bit, amping up security, taking some measures, and … I’m gonna definitely deal with it because it is not acceptable.”

PETA countered with a very nasty statement to TMZ:

“If she presses charges, at least people will be constantly reminded of her selfish, callous disregard for the cruel deaths that she causes by wearing fur.”

They continue, “How much better it would be if she decided to evolve and enhance her image by donating her vulgar furs and exotic-animal skins to the homeless. The activist acted from the heart, something Kim doesn’t seem to have.”

PETA concludes their statement by saying, “If anything, Kim should get a life, the very thing that she denies animals.”

Although PETA is still denying they knew anything about the flour dousing, they awarded Christina Cho with their prestigious Nanci Alexander Award at their 30th Anniversary Gala and Humanitarian Awards Show in 2010. Here’s a photo of her at the awards show: 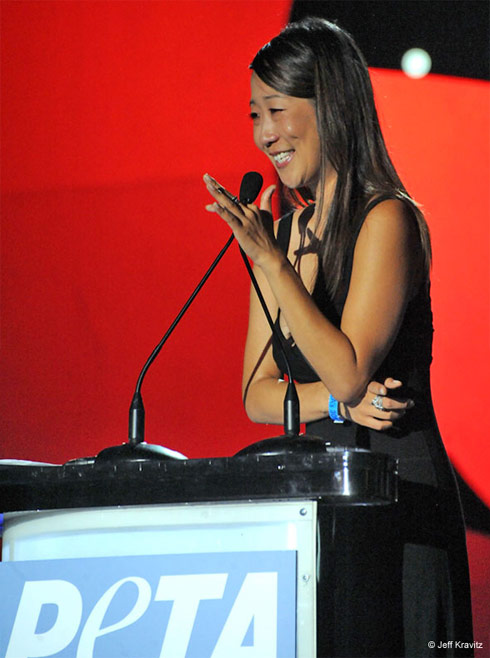 But that’s not all! Christina Cho’s younger sister Michelle Cho is also connected with PETA, working as a PETA spokesperson/ manager in the Los Angeles office. But that’s not all either! Michelle Cho also appeared on a Season 3 episode of Keeping Up With The Kardashians titled “I’d Rather Go Naked… Or Shopping!” 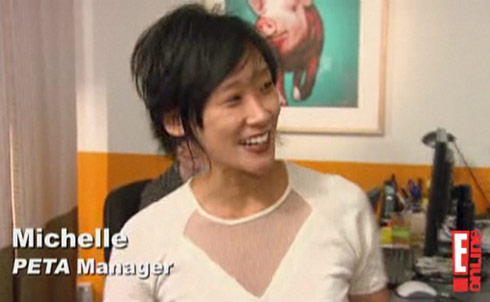 Here’s a clip from the episode featuring Khloe and Michelle meeting and Khloe deciding to do a nude PSA for the organization. (My apologies for the autoplay – E! is notorious for that and I still haven’t been able to figure out how to alter the code to stop it.)

And here’s the end result of Khloe and PETA’s union (Click for the uncensored original): 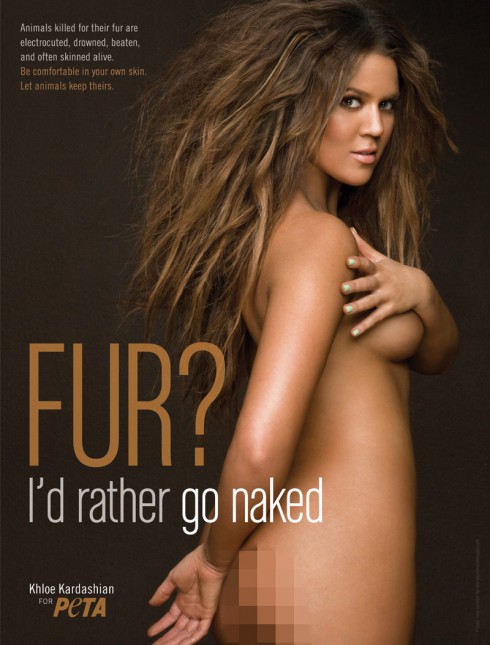 So are Khloe and PETA still good? Nope. Their relationship is just another innocent victim in this terrible Flourgate scandal! Here’s what she posted on her blog yesterday:

Hi dolls. I’m sure you all heard what happened to Kim last week (thank you SO much for the love and support you all showed her), and I just received word that the woman responsible has very close ties to PETA, despite PETA publicly stating otherwise. Not only has PETA lied to the public, but they have proved that they support this kind of behavior. I’ve been a vocal supporter of PETA for a long time but I have also been very vocal about anti-bullying, so this was a huge disappointment for me. As you all know, I don’t condone violence and bullying and what happened last Thursday was just that. I am absolutely disgusted by their behavior. Everyone is entitled to their own beliefs and opinions — I personally don’t wear fur but that doesn’t mean I am going to force my views on anyone else, ESPECIALLY by violating them. I am a very proud sister right now, because Kim handled last week’s incident like a champ. She got cleaned up and was back out there in a matter of minutes. Go Kimmie!

We all need to practice what we preach. I will still continue to NOT wear fur, but I will no longer support PETA. Bullying and harassment is NEVER a solution, and I won’t be a part of any organization that thinks otherwise. 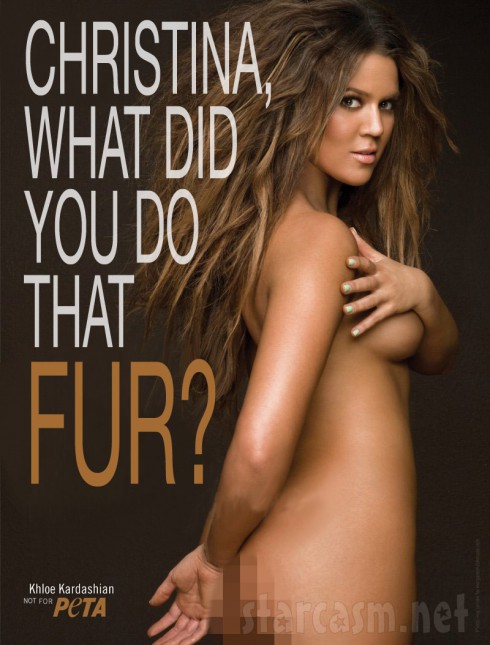 Well, looking on the bright side, as least Khloe’s relationship with PETA lasted longer than Kim’s did with Kris Humphries!

Stay tuned, I’m sure there will be more updates to this story soon. My conspiracy theory is that someone will discover a money trail from both PETA and Kris Jenner, revealing this all to be a huge publicity stunt benefiting everyone involved.

UPDATE – Soon after posting our article we received an email from PETA with comments from Michelle Cho:

“I am not my sister’s keeper, but I love her and have seen her sacrifice a lot of herself as a terrific activist. We work in different ways to help stop animal suffering. It is Christina who got me into the movement to protect animals, and I’ll always be grateful to her for opening my eyes.”

PETA adds, “If Christina Cho is the person who sprinkled flour on Kim Kardashian, we know Christina as a very kind, wonderful long time volunteer. At a reception at our LA office last month she was with a group who watched this video and was visibly shaken. We will support her totally.”

Kanye West and Kim Kardashian are officially husband and wife