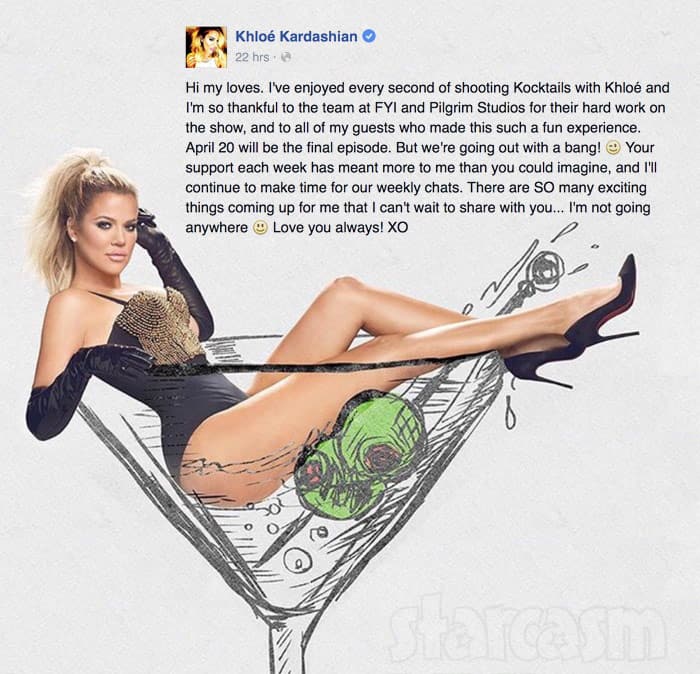 After much speculation, FYI officially cancelled Kocktails With Khloé yesterday and Khloé has since issued a statement thanking fans, the production crew, and her guests before promising that the show will be “going out with a bang!”

Hi my loves. I’ve enjoyed every second of shooting Kocktails with Khloé and I’m so thankful to the team at FYI and Pilgrim Studios for their hard work on the show, and to all of my guests who made this such a fun experience. April 20 will be the final episode. But we’re going out with a bang! 😉

Your support each week has meant more to me than you could imagine, and I’ll continue to make time for our weekly chats. There are SO many exciting things coming up for me that I can’t wait to share with you… I’m not going anywhere 🙂

In case you were curious about what Khloé meant when she said the show would be going out with a bang, that was mainly in reference to the guests that will be appearing on the Kocktails With Khloé finale. That episode will include, but I’m guessing will not necessarily be limited to, Kim Kardashian, Kanye West, John Legend, and Chrissy Teigen! That IS quite the bang!

FYI also issued a statement about the cancellation:

FYI and Pilgrim Media Group appreciate everyone’s great work on the series and are pleased that the show brought new viewers and significant numbers to FYI’s linear and digital platforms. We are grateful to have had the opportunity to work with Khloé and thank her for her hard work and unique voice that she brought to the series.

The cancellation comes less than two months after the network announced they had given the greenlight to 15 additional episodes. “Khloé and her iconic brand have struck a chord with FYI viewers, who have been extremely interactive with the show on social media,” Gena McCarthy, FYI’s senior vp of programming and development, said at the time. “Her ability to draw upscale Millennial viewers across all our platforms in record numbers is a game-changer for FYI.”

The show was originally set to have just 8 episodes, but the additional 15 bumped that number to 23. As it stands now, the show will end after its 14th and final episode airs on April 20.

Khloé isn’t the first in the family to try to extend the Kardashian brand into the talk show market. Momager Kris Jenner gave it a go with Kris in 2013, but the six-week test run did not result in the show being picked up.

In honor of the imminent passing of Kocktails With Khloé, I’d like to pay tribute with my favorite moment from the show — Snoop Dogg playing Farrah Abraham while reenacting her feud with Nicki Minaj (played by actress Kym Whitley): 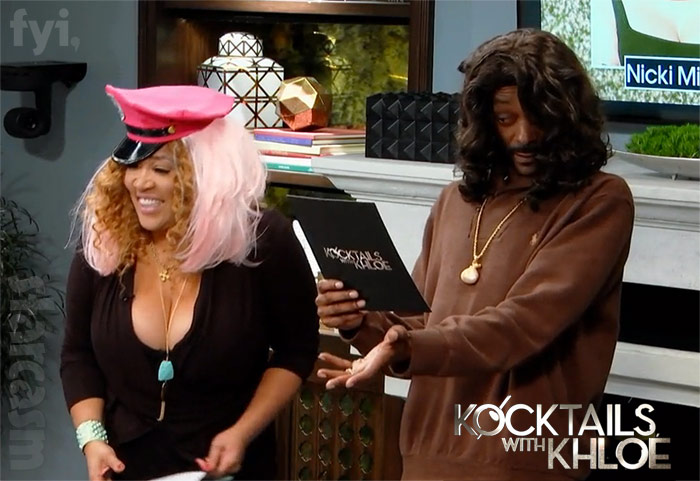