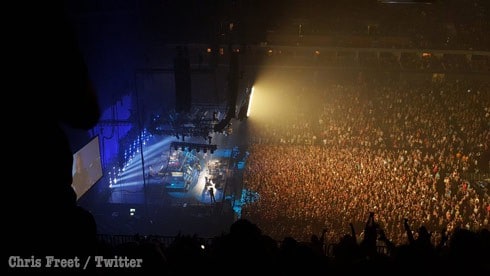 During last night’s concert in Tulsa, Oklahoma, Mumford and Sons rolled out a rollicking version of “Okie From Muskogee” in tribute to Merle Haggard following the news of his passing at age 79.

The band, joined by opening act Blake Mills, lit into the late country legend’s hit and the crowd, as expected, collectively lost their minds. Tweets came rolling in from fans in appreciation of the nod to the most talented singer in country music history.

Mumford & Sons playing okie from Muskogee on the day Merle haggard died, in Tulsa of all places, was pretty cool.

Mumford & Sons paying tribute to Merle with Okie from Muskogee was easily one of the coolest things I’ve ever seen #RIPMerle — Cody Trotter (@cody_trott) April 7, 2016

The song was one of Merle’s biggest hits, it was also one of his most misunderstood and controversial, with its meaning evolving over time-even for the man himself.

Reviewer Matt Barnard with Tulsa World said the entire concert was “easily one of the top five shows I’ve seen at the BOK Center, an impressive showcase of their talent as musicians and just as important, their relentless energy as performers.”

Here’s a view down a little closer but the sound’s a little distorted:

Thanks to Mumford & Sons and Blake Mills for seizing the moment and doing something that Haggard intrinsically knew was important—to let a song help us all heal.

The Lost Notebooks of Hank Williams available for pre-sale