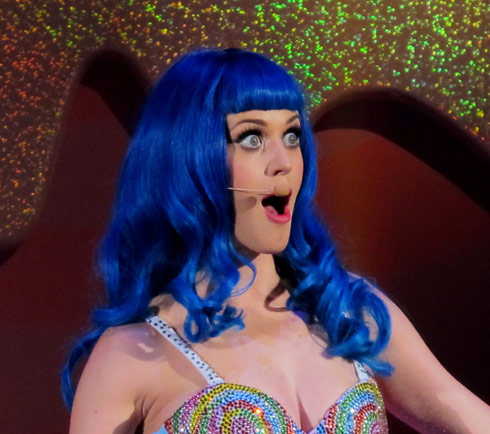 I have to admit I was taken by surprise when I read the latest news on Katy Perry. It had nothing to do with her bewbs, husband Russell Brand, The Smurfs, or a perfume sales call but it had everything to do with her album Teenage Dream and the singles from that album matching a long-standing record held by the late king of pop, Michael Jackson.

Whenever you’re getting your name dropped with Michael Jackson as far as music records go you know you’ve done something amazing and that is certainly the case for Katy. Back in 1987 Jackson’s Bad had five singles from the album reach #1 on the Billboard charts, “Bad,” “Man In the Mirror,” “The Way You Make Me Feel,” “Dirty Diana” and “I Just Can’t Stop Loving You.”

This record’s record stood alone since then until now as Katy Perry’s single “Last Friday Night (T.G.I.F.)” has hit number one making it the 5th from Teenage Dream. The other four chart toppers from Katy’s now historical release are “California Gurls,” “Teenage Dream,” “Firework,” and “E.T.”

If being compared to Bad doesn’t bring this home enough let me put this into further context. Madonna never accomplished this feat and fellow new pop icon Justin Bieber hasn’t even had a single go #1. In the music landscape this accomplishment demands that critics start to look at Teenage Dream as a landmark pop record. It’s pretty substantial and amazing in a historical context.

Katy was grateful and aware of her record as she thanked her fans via Twitter:

Teenagers are full of dreams but I doubt many aim as high as to equal the pop peak of Michael Jackson like Perry’s Teenage Dream has. As a shout out to Katy, here’s my favorite Michael Jackson single “Man in the Mirror.”