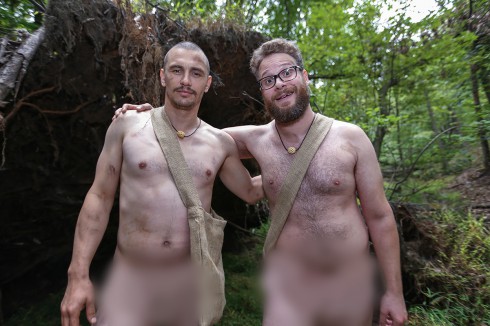 James Franco and Seth Rogen have been semi-naked together before — but now they’re adding “and afraid” to the mix!

“Discovery’s Mega Week has Hollywood baring it all when stars of the upcoming film The Interview, James Franco and Seth Rogen, attempt to survive 21 days Naked and Afraid,” The Discovery Channel announced in a press release. “Franco and Rogen will be tested and pushed to breaking point to find out if they have what it takes to strip-down and survive not only the wilderness, but each other’s company.”

As far as I can tell, Naked and Afraid: Franco and Rogen is just as real as any other episode — even though the duo didn’t get off to the greatest start when they picked sunglasses and toilet paper as their two survival tools. Discovery promises, “Franco and Rogen will be dropped off in a remote location with no food, no water… and NO CLOTHES.”