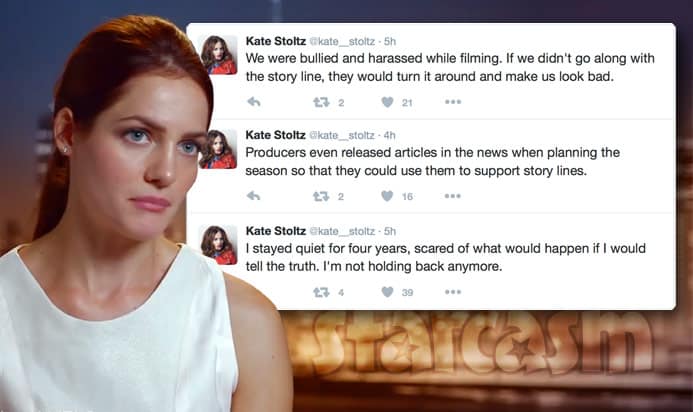 Return To Amish star Kate Stoltz is normally rather subdued and positive on her social media accounts, but the new season of the show has really set her off as she continues to angrily lash out at show producers claiming that cast members were “bullied and harassed while filming” and that “producers even released articles in the news when planning the season so that they could use them to support story lines.” Kate also explains the way she says things were manipulated to emphasize her “mystery boyfriend” story line.

Before we get to Kate’s latest statements, you should really get all caught up by reading her previous posts from last week which include her extremely positive and appreciative comments about her internship with Cynthia Rowley as well as a confirmation that Chapel Peace’s cancer remission was fake.

In case you missed the Return To Amish premiere, I feel I should preface Kate’s comments about being single. In the episode, Kate is asked by her Cynthia Rowley co-workers if she has a boyfriend, to which Kate says she does not. But, when asked if she’d like to go out some time after work, Kate says that really isn’t an option except on weekends. This causes the “gals at the office” to gossip and openly speculate whether Kate is trying to hide a secret boyfriend from them. They even do a bit of internet sleuthing and discover a couple photos of Kate with an older man. That’s pretty much it.

From here out I will step back and let Kate speak for herself. I will include others’ comments if I feel they are necessary to understand the context of Kate’s responses. I will start with Kate confirming that she was not “fresh out of the Amish community” in the first season of Breaking Amish, as the show claimed, but had been living in Florida for some time. From there I will jump ahead to Kate clarifying her experience with Cynthia Rowley.

TWEETER: Would you have left the Amish without the show? I’m not discrediting your hard work by the way 🙂

KATE: Yes, I was living in Florida outside of the community before the show. I would not be Amish regardless of the show

KATE: Doing an internship with Cynthia Rowley was an incredible experience. I learned a lot from her team that has helped me at FIT and in my own work. I have nothing but the greatest respect for her and her team, and will always be thankful that she gave me that opportunity!

TWEETER: Omg, does Cynthia Rowley know that her employees are not working and being nosey and gossipy??? #returntoamish

KATE: I haven’t seen the episode, but I was there in real life. Her employees were incredible to work with.

KATE: Filming for the show happens over the course of a couple of months. At the time, I was going to school full-time, then I was a full- time intern. Between school, my internship and filming, I managed to keep up with all of my sewing. I’m young and determined to make the most of my energy to build my career instead of going out and partying. I also have a dog that needs to be walked a couple times a day. All of these components create an almost nonexistent social life, which is something that many people (including co-workers, friends and producers) simply didn’t understand. I visit my family often and have friends in the fashion industry that complete my life, so I’m happy and busy 🙂

KATE: going out with friends changes when you get a dog.. after work drinks with coworkers isn’t an option, because you need to pick up your dog!

KATE: always!! LOVE my little dog, she like my child in a way. We’re responsible for their well being

TWEETER: how did you get into college w/o finishing high school? Not coming at u – just genuinely curious how u did it.

KATE: I got my GED in New York, then applied at FIT 🙂 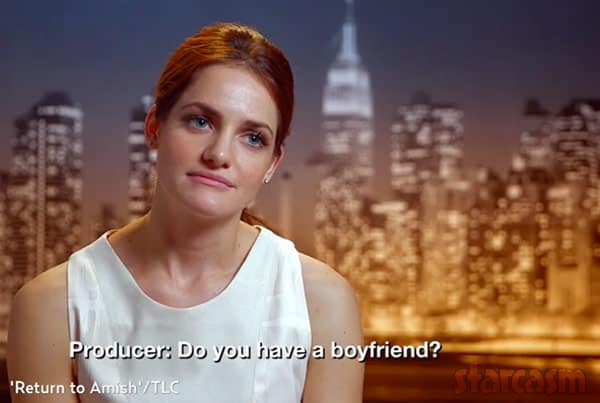 TWEETER: the clip of you exasperated by all the boyf. Questions, theres def. Frustration & Pain in your face. #justanobservation

KATE: it was so exhausting. Producers wanted relationship drama, and since I don’t have a boyfriend they had to create drama.

KATE: We were bullied and harassed while filming. If we didn’t go along with the story line, they would turn it around and make us look bad.

TWEETER: is this how all TLC, and other reality shows, work?

KATE: all of them. it’s something that needs to be controlled- you’d be shocked at the way people are treated

KATE: If they thought our lives were boring, they would create wild story lines about us.

KATE: I’m not just speaking to get my side of the story out. I don’t want people to fall for the same glossy pitch that I did

KATE: I stayed quiet for four years, scared of what would happen if I would tell the truth. I’m not holding back anymore.

KATE: Producers even released articles in the news when planning the season so that they could use them to support story lines.

TWEETER: Can you give an example?

KATE: One was that the married couple on the show was having an affair.. it was based on nothing

KATE: People are people no matter where they come from or what they do for a living. Even spoiled reality stars are humans with human rights.

TWEETER: Sorry to hear this. Is this why Abe & Rebecca couldn’t talk about their first daughter?

TWEETER: Chapel was addicted to heroin. Why isn’t this being revealed in the show?

KATE: I guess it wasn’t part of the story line. They would have to explain the fact that the entire story line was a lie :/

* Regardless of what Kate’s experience has been, I feel I should point out that not all reality shows are produced the way Kate describes. That doesn’t mean hers wasn’t, just that I am certain there are other reality shows that are not.