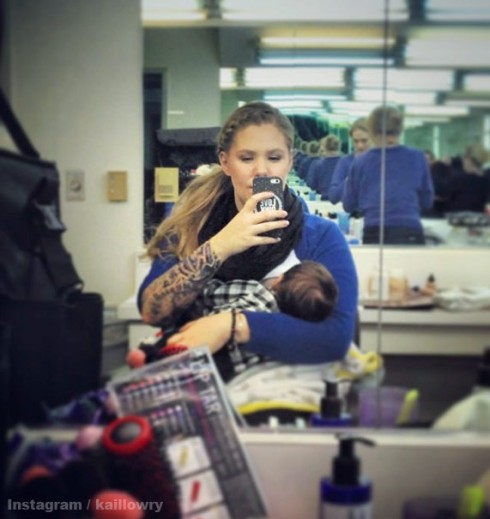 Kail Lowry has fired back at critics of candid breastfeeding photos that the Teen Mom 2 cast member shared via Instagram.

Kail recently uploaded a couple of photos to her account showing her breastfeeding son Lincoln Marshall. Shortly thereafter, she started receiving criticisms by some of her followers.

An example of what was written:

“You can’t possibly feed a baby without snapping pics and posting on twitter . . . posting pics of breast feeding is classless.”

Since then Kailyn has taken down posts from the naysayers and has tweeted not only her take on the backlash, but the reactions of others as well:

@KailLowry what’s with all the boob pics?! We get it, you breast feed! Geesh! Have some class woman.

This girl really just said she doesn’t like to see anyone breastfeeding in public. Like what? Do you cover your face while your eating??

Kail also RT’d a comment that singled out some of her TM contemporaries:

What kind of got lost in translation a little bit during the online back and forth is that some of the folks were not opposed to breastfeeding, but were instead arguing that Lowry didn’t need to go as far as to share the photos of herself feeding little Lincoln via her public Instagram account.

UPDATE: As things often do in the TM universe, this story has taken on a life of its own after Jenelle Evans tweeted that she thought it was messed up that Kail sent out the above RT about other teen moms. Someone pointed out that it could have been about someone else and Jenelle wrote, “uhmm.. just so happened a pic got leaked of me yesterday and who else has gotten an abortion on the show? lol.”

In response, Kail made sure that her followers knew that everything was okay betweeen herself and Evans:

Just because I retweet something doesn't mean I mean it towards Jenelle. Jenelle and I are FRIENDS. My fault for retweeting something.