“Y’all wana talk about filming and sh*t cause I’m so mad I could spill some tea,” Kail tweeted on Sunday. She then tipped the pot and followed through on her tea tease:

I have struggled, y’all have seen it. I haven’t always made good choices. But I’m getting my sh*t together. Started my company. Own a house, building another.

Talkin bout they want me to do a boudoir shoot as the season finale.

Kiss my ass. All the sh*t I’ve been through and been doing and taking my kids on spring break, building house or party….. trip with @TM2LeahDawn isn’t good enough for my finale???

Kail recently did a nude photo shoot, which apparently was not filmed. “I did a boudoir and posted them for my bday on my own because I wanted to,” Kail explains. “Please tell me where the f**k another one would fit in to my season. It has nothing to do with me, my kids or my company.”

A follower replied by offering up her theory. “They need the audience to keep a certain image of you smh,” she tweeted. “They still need a ‘bad guy.’”

Kail says MTV “pulled the ‘body positivity’ card” when trying to sell the nude shoot idea to her. “But again, where does that fit in anywhere??????” she asked. “Try again.”

“You have so many other things to cover: entrepreneurship, the podcast, daily life, etc.” one fan responded. “I would be just as upset if I were in that position. Sounds incredibly sexist of MTV.”

Kail continued expressing her frustration, and somewhere along the way, Ashley (and her fiancé Bar) joined the conversation. I will try to piece together their tweets chronologically, but that is sometimes a little difficult given that responses to one tweet can happen well after it was initially posted. Here is the best narrative I could put together, which includes a few of Kail’s tweets from above that either Bar or Ashley responded to:

KAIL: Y’all wana talk about filming and shit cause I’m so mad I could spill some tea

BAR: They just f**ked up @_mermaidbarbie birthday as well ??‍♂️ idk what the f**k they got going on

ASHLEY: It sucks to be bound by contract to a company that’s always threatening to recast you every time you refuse to be a damsel in distress, on the couch and crying ??? lemme move on, damn.

KAIL: I don’t ever sit on my couch & talk about my baby dads as much as I do when MTV is asking. I feel like that’s such a smack in the face.

KAIL: At what point can I stop being portrayed as a bitter baby momma?

KAIL: Guess I’m only worth a nude photoshoot when I don’t talk about them

ASHLEY: No. You’re only worth it after you’ve spent 10 scenes crying about everything in your life that you’ve already worked out and gotten over ??‍♀️

KAIL: I’m so hurt and frustrated. Like where tf did they think a nude photoshoot would be a good season finale for me? But not my party or house?

ASHLEY: of course !! Girl I’m graduating, apartment shopping, traveling and all they want to film is couch conversations about bar ?they don’t want you to grow as a person ever ? most annoying sh*t

BAR: Cause they are mtv and want someone to always look bad and never show the positive fun times, only things that can turn bad or make the viewers frown upon you 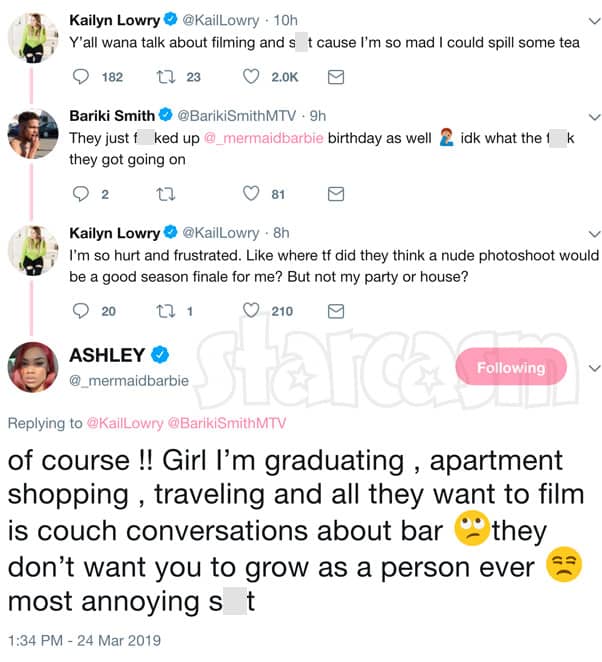 TWEET: Omfg stop complaining or quit the show it’s not that hard. Love to see you work a 9 to 5.

ASHLEY: Are you stupid. Do you understand a contract. Do you even realize that almost everyone on this show has another source. Probably a bigger source of income that requires way more work than a 9-5 would. Her podcast prod team is bigger than the company u work for I’m sure ?

TWEET: She has never had to sign ANY contract. I still don’t believe they asked her to pose buck naked. It’s a lie or a complete exaggeration.

BAR: You don’t film with them so you don’t know what they asked, your making an assumption on a situation you literally probably will never face

BAR: You see the tv side of sh*t let’s see you get on this show and think it’s just a golden ticket with no problems

BAR: You guys are just pure ignorance ? I forget it’s a bunch of middle aged people sitting behind an android phone and fake twitter account tweeting me ??‍♂️ 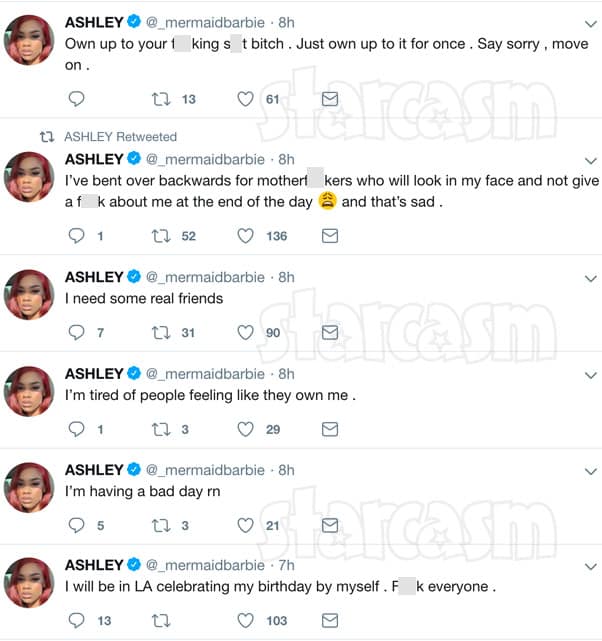 Meanwhile, Kail Lowry’s Teen Mom 2 co-star Chelsea DeBoer also expressed her frustration with MTV over their obsession with baby daddy drama earlier this week. “Getting a little bored with @ChelseaHouska scenes,” one viewer tweeted. “Plus the fact that all they consist of are grilling Aubrey about ‘everything’ Adam related…Come on, give the little girl a break already!”

Chelsea responded by agreeing completely. “Trust me, I’m bored with it too. They take every single mention of him over a 8 month period and then combine it to show it every week.”

Teen Mom OG star Bristol Palin has continued voicing her condemnation of MTV as well, despite agreeing to come back for another season. “I was at a conference all weekend — for my real life,” Bristol began an Instagram post last month while at an out-of-town realtor’s conference. “Teen Mom OG was well aware that I was out of town and not with my son, they still had his dad call me (six times) while his dad was on camera filming,” she added. “How do you think that’s going to be played out?” Bristol concluded with a crying laughing emoji and the hash tag #theshowisajoke.

A lot of fans (this one included) were a bit surprised when it was announced last month that Bristol would be returning after she lashed out at MTV for their “fake fill-in Farrah Abraham/Jerry Springer BS” portrayal of her.

Amber Portwood and Jenelle Eason have also been very vocal about how they are portrayed, and they too have referenced MTV’s obsession with the drama surrounding their exes. I don’t think Maci McKinney has been very vocal about the subject, but she easily could be. The only current Teen Mom 2 or Teen Mom OG mom that doesn’t seem bothered by the baby daddy drama emphasis is Cheyenne Floyd. Of course, that is probably because she and ex Corey Wharton signed on together and seem to thrive on the attention they get as exes.

UPDATE – Leah Messer has since responded to Kail’s tweet about sitting on the couch talking about baby daddy drama:

Touché !! If we have baby daddy drama and be a train wreck thennnnn we matter.. ? #fuckasuccessstory ??‍♀️