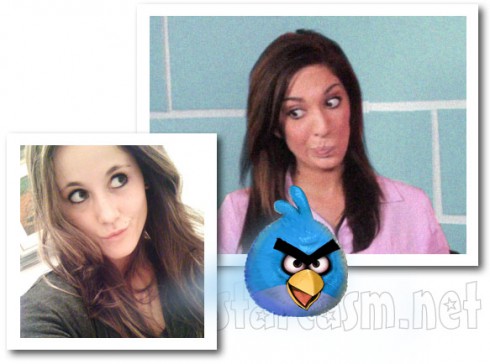 Outspoken Teen Mom 2 star Jenelle Evans has remained relatively quiet about her former online adversary Farrah Abraham since the release of the infamous Farrah Superstar: Backdoor Teen Mom sex tape, but our post earlier about Farrah hosting a photo op inside a $3.3 million home for sale in Calabasa, California without the homeowner’s permission appears to have been the straw that broke the camel’s back and Jenelle couldn’t resist sharing her honest opinion any longer.

Keek it if you’re calling it like you see it!

I’ve never been a big fan of those celebrity boxing match things, but I must confess that there is a huge part of me that I’m not very proud of that would LOVE to see Jenelle whoop Farrah’s backdoor wearing those over-sized super-padded boxing gloves! (I can just imagine Farrah explaining in the press conference afterward that she didn’t actually get knocked out, she was just tired from being awesome and needed to take a nap.)

Meanwhile, we can all sit back and eagerly await Farrah’s response to Jenelle’s comment in the virtual Twitter Thunderdome.

In case you haven’t been keeping track, here are the responses to Farrah Abraham’s sex tape from the other Teen Mom, Teen Mom 2, and Teen Mom 3 cast members:

Catelynn Lowell said Farrah sounded like a dying horse in the preview trailer on Twitter, which got an angry response from Farrah in which she said Catelynn is either jealous or immature before declaring Catelynn has a “weight issue.” Catelynn responded to that by calling out Farrah for all her plastic surgeries and laughing at Farrah’s claims that she is a “role model” to the other Teen Moms. (We offered a poll in which people seemed to agree with Catelynn overwhelmingly.)

Tyler Baltierra also came to the defense of Catelynn, tweeting “@CatelynnLowell Jealousy comes in all fashions. Just remember u don’t have 2 hire someone to give u love or diminish ur respect for ur gain”

Farrah’s Teen Mom co-star Maci Bookout echoed Kailyn’s feelings in a podcast interview in which she basically said that Farrah is her own person and can do whatever she wants, but it was unfortunate that the video was tied to Teen Mom so strongly.

Though the Teen Mom 3 girls haven’t’ voiced their opinions about Farrah’s video specifically, they did have a little fun at Farrah’s expense while in New York City together this weekend by each posing for “Farrah cry face” photos and then combining them in a montage.