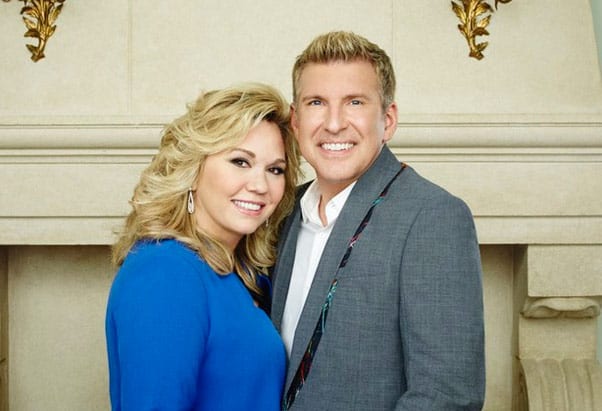 Chrisley Knows Best stars Julie and Todd Chrisley have officially been indicted on charges of wire fraud, conspiracy to commit bank fraud and conspiracy to defraud the United States. The federal sentencing guidelines for the counts indicate that the reality star couple are each facing up to 30 years in prison.

Prior to the federal indictment being filed, Todd Chrisley shared a pre-emptive statement on Instagram revealing that the indictment was coming. Todd insisted that he and his wife are innocent of the charges, and he chalks it all up to a former employee with a vendetta.

Here is the full statement:

I’ve never talked about this publicly before, but there, been a cloud hanging over Julie and me and our entire family for the past seven years. It all started back in 2012, when we discovered that a trusted employee of ours had been stealing from us big time. I won’t go into details, but it involved all kinds of really bad stuff like creating phony documents, forging our signatures, and threatening other employees with violence if they said anything. We even discovered that he illegally bugged our home. Needless to say, we fired the guy and took him to court—and that’s when the real trouble started. To get revenge, he took a bunch of his phony documents to the U.S. Attorney’s office and told them we had committed all kinds of financial crimes, like tax evasion and bank fraud. That got their attention all right, but once we had a chance to explain who he was and what he’d done to us, they realized it was all a bunch of nonsense and they sent him on his way.

So far so good—except that our former employee didn’t give up. Somehow, he persuaded a different set of investigators at the U.S. Attorney’s office not only to reopen the case but also to grant him immunity from prosecution for his own crimes and bring charges against us. As a result, it looks like later this week Julie and I are going be named in a federal indictment charging us with tax evasion and probably a bunch of other financial crimes as well.

I’m telling you all this now because we have nothing to hide and have done nothing to be ashamed of. Not only do we know we’ve done nothing wrong, but we’ve got a ton of hard evidence and a bunch of corroborating witnesses that proves it. Anyway, when all is said and done, we trust in God and God says to us in Jeremiah 51:36, I will defend you. I will be your lawyer. I will plead your case.” We know that if and when this goes to court, the truth will prevail and the charges against us will be exposed for the outrageous lies they are. As it says in Proverbs 3:5-6. “Trust in the lord with all your heart. And lean not on your own understanding; in all your ways acknowledge Him, And He will make your paths straight.”

We want to express our gratitude to everyone who helped place us where we are today in our lives. We thank you for your support and we will continue to work every day to earn your respect, loyalty, and admiration.

We covet your prayers,
Todd, Julie & the entire Chrisley Clan 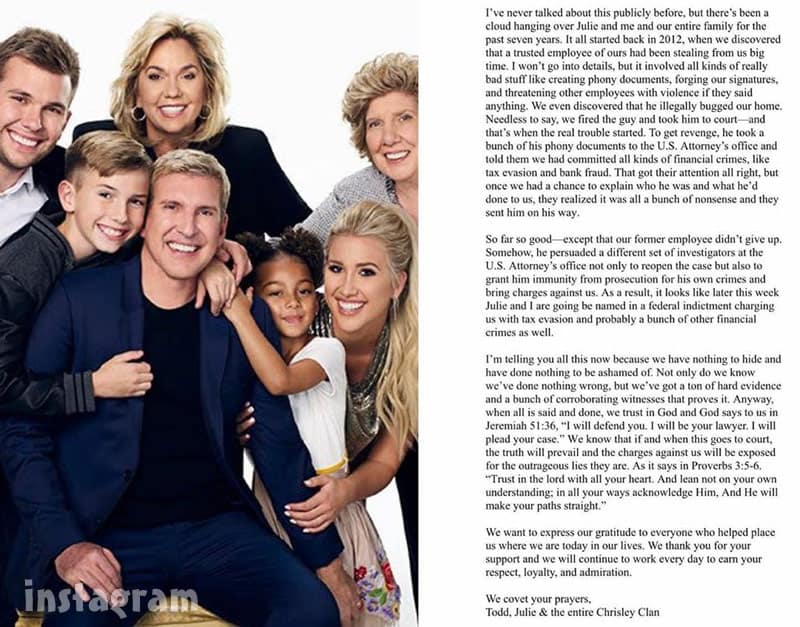 Comments from more members of the Chrisley family after the statement was issued:

Chase Chrisley: I love you dad, the truth will come out. We are going to beat this and come out stronger than ever. You have taught me so much and continue to teach me everyday what it means to truly be a man, father, husband and also my best friend. No matter what happens nothing can take us away from each other. I’m beyond proud of you and i hope and pray i can grow to be half the man you are. I love you pops

Savannah Chrisley: Thank you for being YOU! You have and always will be the glue that holds us all together. God has a much bigger plan for all of us and this is just part of it. Thank you for being the most loving, kind hearted, and honest father. You will forever be my bestfriend…now let’s let God do the work. HE will never forsake us ❤️

So what exactly are Julie and Todd Chrisley being accused of?

According to prosecutors, Todd and Julie ran the scheme from 2007 through 2012, allegedly fabricating documents and providing false information to banks when applying for and receiving millions of dollars in loans … which they allegedly used to fund their lavish lifestyle.

According to the indictment, Todd allegedly worked with a partner to make it look like one of his bank accounts had $4 million, when they actually didn’t even have an account at that bank at the time. The feds claim Todd emailed his partner, “You are a f***ing genious [sic]!!!! Just make it show 4 mil+.”

As for Julie’s role … the feds claim she fabricated multiple financial documents by physically cutting and gluing or taping them together. According to the indictment, Todd allegedly told someone he was working with to “find a crooked accountant.”

Officials claim Todd and Julie set up a production company, called 7C’s Productions, which served as a loan-out company for all the money earned through their popular reality show, “Chrisley Knows Best,” which airs on the USA Network.

The documents claim millions of dollars were deposited into the production company account over the years, but the reality stars did not file tax returns in time for 2014, 2015 or 2016.

When the taxes were paid, officials claim the numbers are bogus and that actual amounts were falsified as to mask how much money was actually owed.

Officials claim that “throughout the conspiracy,” Todd and Julie knowingly went on lavish spending sprees, dropping thousands of dollars at electronic stores, luxury retail stores and other purchases … but claimed they did not have enough cash to pay off their outstanding tax debt.

The federal indictment is just the latest in a long string of shady legal issues for Todd. Here are just a few examples from the Starcasm archives:

It’s unknown if Todd an Julie’s legal issues will be featured on Chrisley Knows Best.

Why isn’t Kyle Chrisley on Chrisley Knows Best this season?