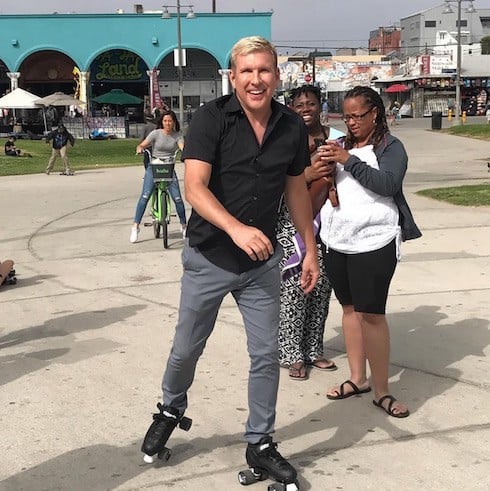 Todd Chrisley remains one of the most popular figures in all reality TV-dom, but the single best-known fact about him remains the $45 million bankruptcy claim he filed in 2012. At the time, the Chrisleys lived in a 30,000 square foot mansion in the Atlanta suburbs and spent $300,000 per year on clothing; they have, of course, since lost all that.

As we’ve previously reported, Todd has long claimed he and his family are out of the red without offering much in the way of specifics. Three years after declaring bankruptcy, Todd said that the Chrisleys were “in a really good place financially, emotionally and psychologically”–and by that point Chrisley Knows Best was a solid ratings draw, so things appeared to be on the upswing for the then-46-year-old.

However, a quick Todd Chrisley net worth update reveals that the Nashville transplant might still be in dire financial straits. Separate reports published earlier this year describe outstanding debts running into the million-dollar range, a large portion of which is reportedly unpaid state taxes due before the Chrisleys uprooted from Georgia to call Tennessee home.

According to the Atlanta Journal-Constitution‘s Radio TV Talk blog, the state of Georgia filed a $700,000 lien against the Chrisleys for unpaid taxes dating from 2009. An investigation revealed that the Chrisleys ducked the taxes by pretending to live in Florida–and further revealed that they filed no state income taxes at all from 2004 to 2011, meaning further liens are possible. (Florida has no state income tax.)

Beyond that, a tabloid report from early 2017 alleged that Todd had yet to pay the $150,000 fine he agreed to as part of his bankruptcy settlement in 2015. (There does appear to be some confusion on this point: a separate Daily Mail report stated that the $150,000 was a settlement, not a fine, and that Todd still owed $70,000 of it.) And the $4.4 million personal loan that Todd’s wife Julie Chrisley gave him after the bankruptcy declaration appears to be outstanding, as well.

Thus, it would appear that the Chrisley Knows Best fixture is still at least $770,000 in debt–and any Todd Chrisley net worth update for 2017 has to hover closer to the -$5 million (that’s negative $5 million) figure for which he became infamously known during bankruptcy negotiations. (Plus, if Julie does decide to call in her loan, Todd will indeed be five-plus million in the hole.)

One other item of note: a separate Radio TV Talk article explained that Todd Chrisley’s income was approximately $2 million dollars, based on the 2016 tax tables and Todd’s claims of paying between $750,000 and $1 million in federal tax every year. But, other than Chrisley Knows Best and Instagram product placements, it’s not clear how Todd makes his money, or how likely it is that those two sources of income could add up to such a substantial sum.

Yet another landlord is suing Tyga, whose OnlyFans might not be going great