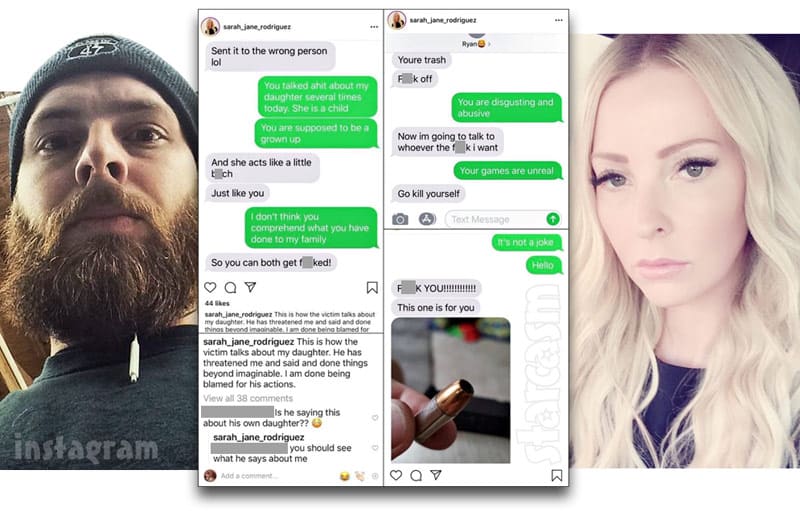 The Real Housewives of Orange County star Tamra Judge’s son Ryan Vieth is back in the headlines this week after his ex, Sarah Rodriguez, shared a series of very disturbing texts allegedly between Ryan and herself. In addition to describing Sarah’s daughter as a “little b*tch” in the messages, Ryan calls Sarah “trash” and tells her to “go kill yourself.” The alleged texts conclude with Ryan sharing a photo of a bullet along with the message: “F**K YOU!!!!!!!!!!!!!!!!!! This one is for you.” (Both Ryan and Sarah are avid gun enthusiasts with numerous weapons.)

“This is how the victim talks about my daughter,” Sarah captioned the text message images, which she deleted not long after posting. “He has threatened me and said and done things beyond imaginable. I am done being blamed for his actions.”

Tamra was on Watch What Happens: Live! this week, and Andy read a viewer’s question about the texts. Here is a transcript followed by a video:

ANDY: The number one question for you tonight is going around and around on Twitter. We talked about this a little bit before the show. [Spells out Twitter username]: “You have to ask Tamra about her son Ryan’s texts with Sarah that she posted calling her daughter a name. What’s going on?”

TAMRA: Calling her daughter a name?

TAMRA: Wait, their daughter or her daughter?

ANDY: I don’t know. I haven’t read the texts.

TAMRA: I don’t know. But Sarah tends to go on social media and post all this stuff and delete it. So, I’m not buying into it.

ANDY: You’re not buying into it?

After Tamra’s appearance on WWHL, Sarah responded to a few comments on her Instagram account and insisted that Tamra “not buying into it” was absurd because she was well aware of the texts all along. Here are a couple excerpts from the comments:

COMMENT: Drag him. I know that’s your baby girl’s father. But it’s already out there. So I’d expose and explain what he’s really like. Seems very volatile and immature. ?Not really Tamara’s fault he’s a grown man. But she should accept what he’s like and talk some sense into him. ?

SARAH: She knew abut the texts before I called the cops. So for her to say I lied is bullsh*t

COMMENT: I am so sorry that Tamara isn’t supporting you..She’s got to accept the fact that her son has serious issues. Please see an attorney right away. Keep Ava away from them for now if it’s at all plausible. You, and your Children’s live come first and foremost.

SARAH: She lied on national tv. She knew all about what was going on.

UPDATE – Ryan has responded to Sarah’s posts with additional screen capped text conversations. He also accuses Sarah of hooking up with Dakota Meyer while he and Bristol Palin were still working on their marriage! Click the link for all the latest!

Sarah posting the text messages is just the latest chapter in the couple’s very acrimonious relationship over the last five years. In addition to numerous angry social media exchanges, Ryan was arrested for domestic violence in June of 2015. Those charges were later dropped, but the animosity continued.

Here is a timeline of our coverage of the couple’s very public troubles from a few years ago:

The Real Housewives of Orange County star Tamra Judge’s son Ryan Vieth appeared to have his life on track with new wife Sarah and their five-month-old daughter Ava, but it seems Ryan may once again be falling into his unstable ways as it was revealed today he was arrested last month for domestic violence against Sarah, with Ava and numerous firearms present. Keep reading for all the details.

Tamra Judge responds to her son Ryan Vieth’s arrest in late June for domestic violence, pointing out that all charges were dropped and that Ryan and his wife, Sarah, are currently in counseling. Also, an “insider” (who must be VERY close to Ryan) shares details about what happened the night he was arrested, which included Ryan discovering multiple “nasty” text messages to multiple men on Sarah’s phone.

The Real Housewives of Orange County star Tamra Judge’s son Ryan Vieth and fiancée Sarah Rodriguez are on the outs again. Ryan posted, then deleted, a scathing video about Sarah on Instagram yesterday. Sarah responded on her Instagram account with numerous frustrated comments, telling one follower concerned that she already has four children: “don’t worry, I can’t have anymore babies.”

Tamra Judge’s son Ryan Vieth and his estranged wife Sarah Rodriguez continue to have a roller coaster break up, as Ryan breaks the peace yet again with another attack on Instagram insinuating that she cheated on him. Sarah has since responded at length on Instagram.

Less than a month after Ryan Vieth and ex Sarah Rodriguez lashed out at each other once again on Instagram, the two have seemingly made peace yet again just in time for their daughter Ava’s first birthday. Keep reading to see the couple’s photos and read their positive messages celebrating Ava’s big day!