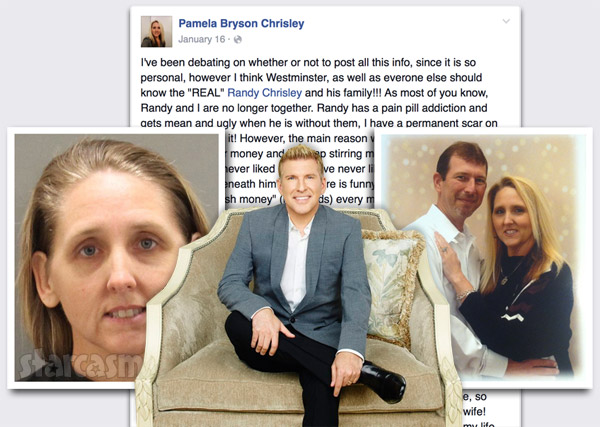 Chrisley Knows Best star Todd Chrisley and his family are once again in the headlines for legal drama. Todd’s sister-in-law Pamela Chrisley was arrested in South Carolina on Friday for allegedly blackmailing the Chrisley clan by threatening to sell a story about them to the National Enquirer. 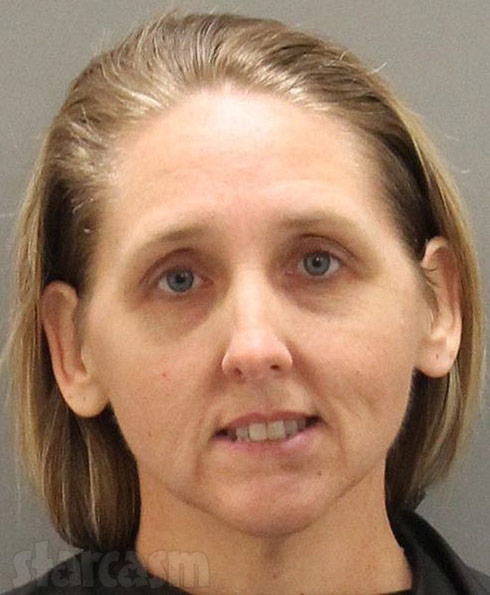 Folks, today is a sad day for our family , if you notice this individual shares our last name and is married to my brother Randy , Pamela has been involved in a scheme with other individuals in GA and SC to extort hundreds of thousands of dollars from our family because my brother filed for divorce from her , our family has endured this harassment for many months and had to stay quite to let law enforcement from two states to do their job , today is the first day of many to come and additional charges but our family will persevere and move forward together , we are at peace now that we know who has been behind this tragic situation and ask for your prayers and support for healing at this time.

Pamela’s attorney, Delane Rosemond, not only denies Pamela’s involvement in the blackmail or extortion of the Chrisley family, but she says the arrest was merely a “ploy” to increase ratings for Chrisley Knows Best, and added that Pamela plans to file a $1 million defamation lawsuit against the Chrisley family.

“These salacious allegations of extortion of monies from a family that is involved in reality TV known as Chrisley Knows Best unfortunately has permeated Oconee County,” Rosemond said in a statement. “As you may know the ratings for the Chrisley’s reality TV show has dropped tremendously over the last couple of viewing seasons and this is simply a ploy to increase their ratings.”

So what happened to turn Pamela against the Chrisley family? First, a little background information: Pamela married Randy Chrisley in August of 2012. Here is a photo of Pamela and Randy together from Facebook: 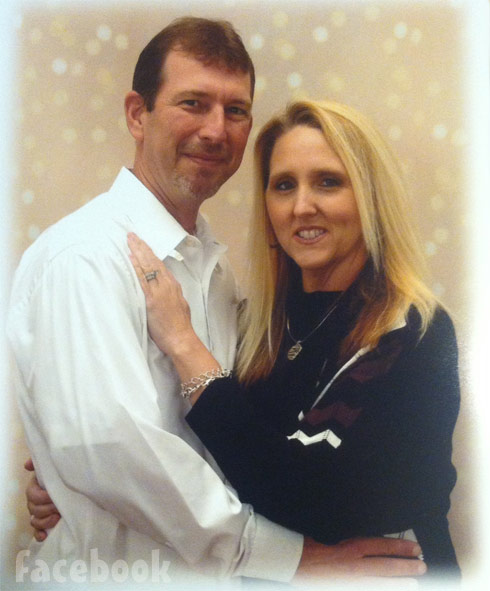 In late 2014, Randy was diagnosed with stage four cancer. Pamela helped Randy through the chemo and treatment before (according to Pamela on Facebook) Randy had an affair — although the two may have already been separated at the time. Here’s a Facebook post from Pamela from February, 2016:

Let me just say, if you’re stupid enough to date a married man and post it on Facebook…..see you both in court for my adultry divorce proceedings!!! And neither of us have filed for a divorce, he’s very much still married !!!

Apparently the split between Randy and Pamela was acrimonious, and, prior to the post above, Pamela WENT OFF on Randy and the rest of the Chrisley family, claiming that Todd and Randy’s mother Faye were “having to pay Randy ‘hush money’ (his words) every month, so he doesn’t go public with the family secrets that could destroy them!” Foreshadowing the alleged extortion and blackmail to come, Pamela added: “She doesn’t know (til now) that I know all those same secrets as well.”

I’ve been debating on whether or not to post all this info, since it is so personal, however I think Westminster, as well as everone else should know the “REAL” Randy Chrisley and his family!!!

As most of you know, Randy and I are no longer together. Randy has a pain pill addiction and gets mean and ugly when he is without them, I have a permanent scar on my knee to prove it! However, the main reason we aren’t together is Randy’s greed for money and his crap stirring mother, Faye Chrisley!

It’s no secret Faye has never liked me and I’ve never liked her! Her words were, ” Randy married beneath him”! But it sure is funny how she’s the one having to pay Randy “hush money” (his words) every month, so he doesn’t go public with the family secrets that could destroy them! She doesn’t know (til now) that I know all those same secrets as well. That family turns on each other when they get mad and like to talk, plus I was his wife, of course he told me things!

Faye was going behind my back, as well as Randy, when I was at her house taking care of Randy when he had cancer, they were negotiating a deal for Randy to leave me!!!! Yep, I’m busting my ass to take care of him and he’s behind my back texting with his mother, Todd, Andrea England and God only knows who else, telling them as soon as he got well he was leaving me! And he did…..not even two months after he was declared cancer free!

Randy was bribed by his mother with the gift of the family home in Westminster and it being completely remodeled for him !!! If you don’t believe me, just ride by, the workers are there everyday! So, in a nut shell, Randy was too sorry to make payments on our own home, so mama bribed him with one with no payments, if he’d just leave his wife!

That takes a cold hearted bastard, after I took a year and a half of my life taking care of his sorry ass, when he wasn’t even able to wipe it! I never left his side, spent days in the hospital, 24/7 sleeping in a straight chair most of the time, doing things for him that most wives wouldn’t even do, never saw my own children or grandkids, because I had to move to Atlanta to take care of a low life that didn’t even appreciate it! Randy never once thanked me…..he said,”why should I thank you? You were my wife, that was your job”!!! Really!!! And not to mention the mental and emotional stress I endured from Faye! Which Randy never defended me…..now I know why! But he just used me to take care of him cause no one else would! But that’s ok, you’re gona pay for this “caregiver” when we go to divorce court !

His mother is his addiction enabler….she pays him money to keep quiet, knowing that money is being used for bad purposes! That is when she’s not having to buy him big screen tvs and tires for his truck! Yeah, Randy is “disabled”, but I’m sure the Social Security Board is gona rethink that when I show them all the pictures I have and the texts where Randy was doing all sorts of WORK for his mama!

One commenter pointed out that “all them magazines an poparautzi would love to hear your story while making your bank account fat !!!” and Pamela responded with: “I’m already working on that girl !!!” Pamela then added, “I was ‘beneath’ Randy, but yet, it’s half of that family that has been to PRISON ! Including Randy, for robbing a convenience store !”

After Pamela’s friends continued to share words of encouragement, Pamela expressed her appreciation. “Thanks everyone for the support,” she wrote. “I know one day Randy Chrisley will get what’s coming to him! I just hope I get to see it happen and watch that smugg look get wiped off his face !!!”

Indications that Pamela and the Chrisleys were headed for trouble date all the way back to late 2013 when she shared her thought after seeing the first preview clip from Chrisley Knows Best. “Just watched the trailer for my brother-in-law’s new reality tv show, Chrisley Knows Best,” Pamela wrote. “Told my husband I’m so ashamed that i may have to go back to using my maiden name!!! SMH!”

It’s unclear if the drama with Pamela will be featured on the show. To find out, tune in to Chrisley Knows Best Tuesday nights at 10/9c on USA.

Why isn’t Kyle Chrisley on Chrisley Knows Best this season?