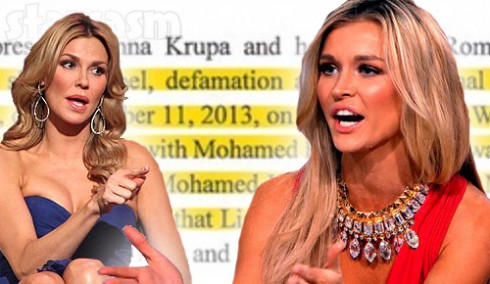 It’s a battle of the Housewives… Who really don’t have anything to do with each other! Real Housewives of Miami‘s Joanna Krupa informed Real Housewives of Beverly Hills‘s Brandi Glanville that she is suing her in the Florida courts for “slander, libel, defamation and/or intentional infliction of emotional distress,” Life & Style reports.

The long-distance legal battle stems from a 2013 episode of Watch What Happens Live when Brandi claimed Joanna slept with Yolanda Foster’s now ex-husband Mohamed Hadid. But that wasn’t all…

“Well, Mohamed did tell me that her p***y smelled,” Brandi said, firing back at a tweet from Joanna about why her marriage to Eddie Cibrian failed. “Just saying. It’s true! I’m not lying! And Lisa Vanderpump was there when he said it!”

In the legal document sent to Brandi this week, Joanna said the accusation she slept with Mohamed while he was married is false. She added Brandi knew it was false and was in the wrong for repeating them on national TV.

“She doesn’t even know me,” Joanna told Life & Style.

A friend said the story “humiliated and harmed” Joanna. Proving that will be key if a judge considers the case, as Joanna’s attorneys surely advised her. Otherwise, it seems a bit odd she’s bringing up a rumor almost everyone forgot about more than one year later.

Is Saul Goodman real? Is he based on a real person?