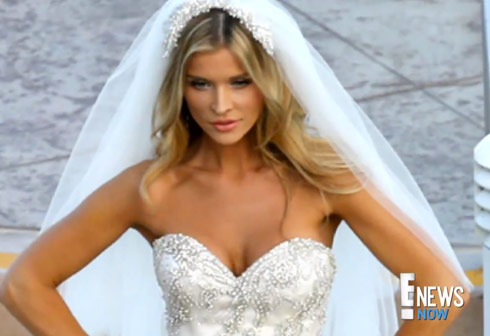 Joanna Krupa and her nightclub owner boyfriend Romain Zago got married on June 13 at Carlsbad, California’s Park Hyatt Aviara Resort alongside 150 of their closest friends, family, and of course, Joanna’s Real Housewives of Miami co-stars. It was a lavish affair and Us Weekly has all of the details from what is being called Joanna’s “Million Dollar Princess Wedding.”

Joanna walked down the floating, flower-decked aisle in a $30,000 Chagoury Couture strapless gown with “a sweetheart neckline, endless yards of cascading ruffles on the skirt and a detachable 6-foot-long cathedral train.” The bodice featured a Swarovski crystal and rhinestone encrusted corset. Joanna also wore a veil made of silk tulle, highlighted with even more crystals and rhinestones.

Here are some photos of Joanna Krupa’s wedding gown courtesy of an E! News video report:

According to Life & Style, the party continued into the “grand ballroom, where a large dance floor had been set up and guests enjoyed a multi-course dinner.” A second source reveals, “Everything down to the napkins were custom made.”

Prior to getting hitched, Joanna and Romain had been engaged for three years — on and off. As fans saw during the show, Romain, at one point, had a lapse in judgement and engaged in an inappropriate relationship with another woman via email, which resulted in them temporarily calling off their engagement. Luckily, they were able to work through it and became re-engaged during the Season 2 finale.

The Real Housewives of Miami‘s third season is set to return to Bravo this August.