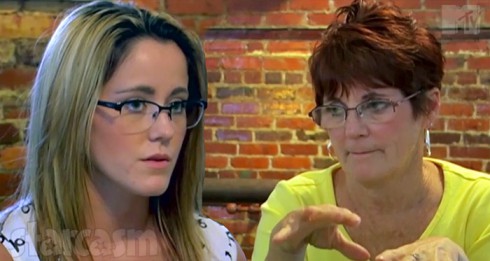 Teen Mom 2 star Jenelle Evans took to social media to answer a couple of questions about the run-in she had with cops at her home over the weekend.

Radar broke the news about police being called to the home Jenelle and boyfriend David Eason share. They spoke with Lt. Brewer of the New Hanover County Sheriff Department, who said:

David Eason, he is the one that calls…he states that his girlfriend’s mother came to the house uninvited, screaming and yelling at him in front of the children and the subject in the house is Barbara Evans.

The 911 log noted that the dispatcher could hear “yelling in the background.” It also stated that there were three kids in the home, and that the altercation was verbal only. “There was no report taken, because what it appears is that it was a disagreement between him and the mother. She is the grandmother, so she has rights to have the children, and she left with the children,” Brewer added.

After this story broke, multiple outlets attempted to reach out to Evans’ manager Johnny Donovan, who posted the following to Facebook about the story:

Jenelle, who’s stated that she wants to be more interactive with her fans in 2016, answered a couple of questions about what happened via Twitter this morning.

Kaiser was never taken from my house… I was in the bathroom doing my makeup to go to lunch with my mom https://t.co/yLL50YJPGb

Kaiser was in David’s arms and she kept yelling so he asked her to leave and she didn’t… Simple. https://t.co/yLL50YJPGb — Jenelle Evans (@PBandJenelley_1) January 21, 2016

When asked “why did she [Barbara] take both kids then?” Jenelle said:

That was my nephew and Jace she took… Not Kaiser https://t.co/S7yT2XLizY