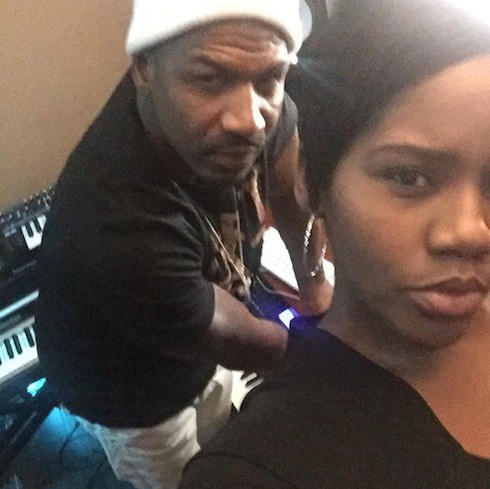 Could the latest Love & Hip Hop Atlanta update be true? Is famed producer Stevie J bringing Kelly Price onto the show when it returns for its fifth season later this year? According to a new report from none other than VH1 itself, the possibility is real, thanks to some intense in-studio work the pair has been laying down.

Kelly, Stevie, and Faith Price have all been spotted working together recently, and the producer has a new show, Stevie J and Joseline Go Hollywood, premiering this Monday, January 25th. Plus, the coy nature of VH1’s article suggests the likelihood of at least some sort of crossover–and VH1’s official updates on its shows tend to point toward expected plot developments on those shows.

So focused with my sis @mskellyprice #DangerZone

We made great music tonight! Long day over. About to lay it down so we can get up and do it all over again in a few hours. @hitmansteviej_1 #IdontThinkYaReady4ThisKelly

…including a snippet of a brand-new track:

As for the “jealous bender” that Joseline Hernandez allegedly went on while Stevie J was out of town? Stevie says that the destruction Joseline got up to–including bleaching “at least” $40,000 of his clothes–led to the two separating. Yes, they have a new show premiering in just a few days, but Stevie “confirmed” that, right now, he and J are apart. When asked why Joseline would have bleached out his clothes (including, separate from the $40,000 wardrobe, a $10,000 “vintage Bad Boy Records jacket”), Stevie was his usual laconic self: “I don’t know, man. Jealousy is a motherf*cker. Jealousy is weak.”

As for whether the two will reconcile, Stevie seemed resigned to the fact that two reality shows tie he and Joseline together: ““I’m going to where the money at,” he said. “I’m going to enjoy my family, man. Bad Boy for life, baby. I’ve got to follow my dreams and follow my vision. I’m at the best part of my life, right now: my career.”

Stevie J and Joseline Go Hollywood debuts Monday, January 25th, at 9 PM EST on VH1. You can check out the premiere episode here.

LHHATL Tommie confirms hookup with Joseline: ‘What that mouth do’