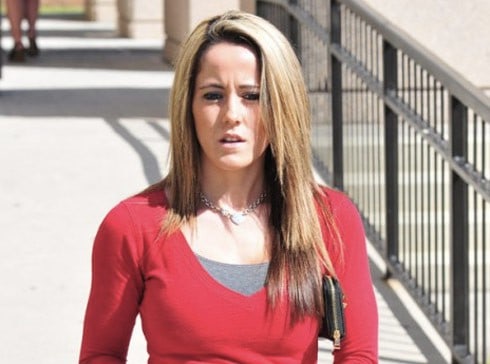 Teen Mom 2 firebrand Jenelle Evans has released a preview of her memoir, Read Between the Lines: From the Diary of a Teenage Mom, in which she details her heroin addiction.

My first trip was amazing. I won’t glamorize the drug by going into the long details of why people love it so damned much. Before I knew it, I was shooting up four or five times a day. I was hooked… The first thing I lost to the drug was my family. I disowned my mother and siblings and friends, but the truth is no one wants to talk to you when they suspect you’re a junkie.

When her mom, Barbara Evans, kept her from seeing her son Jace, Jenelle says things only got worse:

It hurt my heart, made me sick to my soul that I couldn’t see my son. I filled that hateful void with more drugs. The drugs always made the pain go away. They didn’t turn on me or betray me. I guess heroin was my first steady, dependable lover. It gave me what I needed to live and I gave it my life. By this entry, heroin was the only thing I had in my life that loved me.

Jenelle was arrested on April 23rd, 2013, along with her ex-husband Courtland Rogers, and charged with heroin possession and assault. Starcasm posted a detailed timeline of events that transpired after that arrest.

The top photo (above) comes from Jenelle’s court appearance on the charges.

In the passage from her book, Jenelle goes on to explain that a blackout, combined with the knowledge that her boyfriend didn’t love her, caused her to admit herself to a New Jesrey hospital to detox.

She added that it was her mom, surprisingly, who was there for her when she needed it most. “I ended up calling the last person in the world I expected to talk to, or expected would help me. My mother,” Jenelle wrote. “For all of our problems, I owe her for what she did that day. I called her and told her what kind of trouble I was in, and how I needed help.”

Just today, it was revealed that Jenelle called the police on Barbara when she refused to allow Jenelle to have Jace for Mother’s Day weekend.

Needless to say, the public drama surrounding Jenelle’s life has been mind-boggling at times. If her book’s behind-the-scenes reveals even come close to matching that drama, it will prove to be a must read.