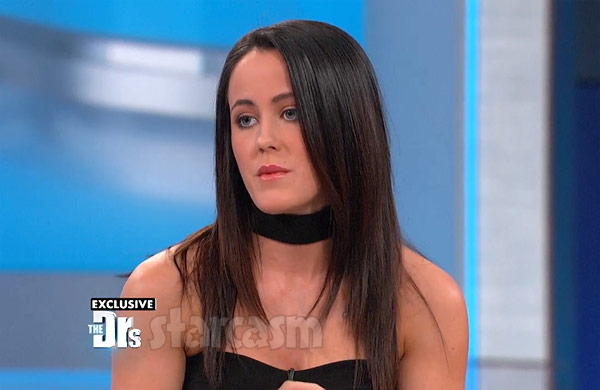 Teen Mom 2 star Jenelle Evans has been battling a mystery illness for more than six weeks, and on today’s episode of The Doctors, it looks as though she may have finally received an accurate diagnosis for what has been causing her symptoms!

We will start off with a thorough background of exactly what Jenelle has been going through and the steps she has taken so far, which she explained on The Doctors.

Dr. Travis Stork introduces Jenelle’s segment. “So picture this: you’re sick with a lot of symptoms, you go to doctor after doctor after doctor, and you’re not able to figure out exactly what’s going on. That’s a medical nightmare for anyone, and even more so when you’re in the public eye. This is Jenelle’s story.”

Here’s the video clip from the beginning of Jenelle’s segment:

At this point Jenelle takes over and explains exactly what she has been going through. “Six weeks ago, everything was going great with my career, and then I just had to put everything on hold,” she says. “I started having night sweats, severe anxiety, hot flashes, pelvic pain, joint pain, chest tightness, extreme back aches, and I have really shaky hands. I wake up in the middle of the night and my legs will be throbbing, like someone is hammering my kneecaps. I have abdominal pain, I can’t eat anything, my appetite is gone, and I couldn’t figure it out.”

Jenelle then explains the steps she has taken prior to her appearance on The Doctors. “I went to my OB/GYN. He said my estrogen levels were fine. He told me to come back for an ultrasound. And during that time, all these symptoms started happening and I rushed myself to the ER. The doctor told me I had anxiety and he gave me two milligrams of Ativan [aka lorazepam]” 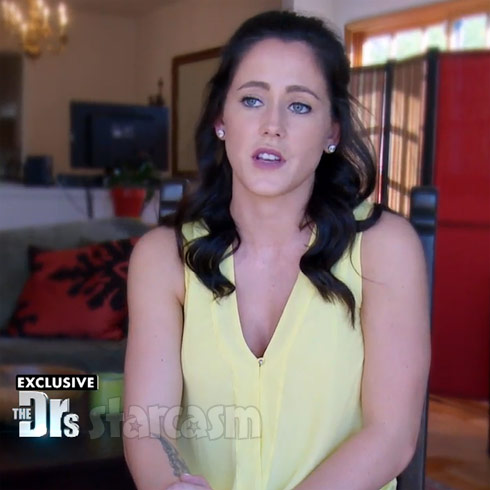 So did the Ativan work? Yes and no, says Jenelle. “Yeah, it took away my anxiety, but all my other symptoms were still there. I went to the ER and I saw a different doctor. He was, like, ‘Alright, I’m going to do every test that the first doctor did, but I’m going to do a little bit more.'” Unfortunately, those tests didn’t reveal anything either. “He said, ‘Everything’s normal,” reveals Jenelle. “‘It seems like you have anxiety,'” the doctor added. “I was hopeless at that time. I said, ‘It’s not anxiety.'” So Jenelle took another step.

“Since I wasn’t getting the answers I needed, I took it upon myself, and I thought maybe it was my nervous system. So, I went to go see a neurologist in New York. She said ‘It looks like everything’s fine with your central nervous system.’ I told the neurologist that I’ve had black stools really bad, and she goes, ‘I think you need to go see a GI [gastrointestinal] doctor.'”

“I went and saw the GI doctor, and he told me, ‘It sounds like you have IBS,’ which is irritable bowel syndrome. I was, like, ‘There’s something still wrong with me because I’m having hot flashes. So, I went to see my OB/GYN and I got an ultrasound done. He told me that everything came back negative. And he said, ‘The only thing I can do now is refer you to an endocrinologist.'”

Jenelle sums up her frustration. “I’ve been going to doctor after doctor, specialist after specialist — I just want to know some answers and live a happy and healthy life.”

That ends Jenelle’s intro and we then see her sitting along with the rest of The Doctors cast on stage. “It’s been playing out in the news,” says Dr. Stork of Jenelle’s “health crisis” over the past couple of months, “because obviously, [you’re] a public figure. Is it weird when you’re struggling with something like this to see it all play out in the headlines and conjecture as to what’s going on?”

“Yeah, it’s definitely hard,” says Jenelle, “especially because you don’t get help from the doctor in your home state, so then you reach out and I went to New York and now I’m here, and people are, like, ‘Oh, she’s taking all these joy trips’ and all this and that. And I’m, like, ‘No, I’m trying to find answers from other doctors.'”

“And is this at the point where, as I think we heard, that you might even quit the show because your health is –”

“Yeah,” says Jenelle. “My anxiety was really bad, and it’s still bad. And it’s just, everything is being publicized so much that I just feel like I need privacy at this point and time. That’s why I didn’t want to discuss with any outlets what was happening until I figured out what was wrong myself.” 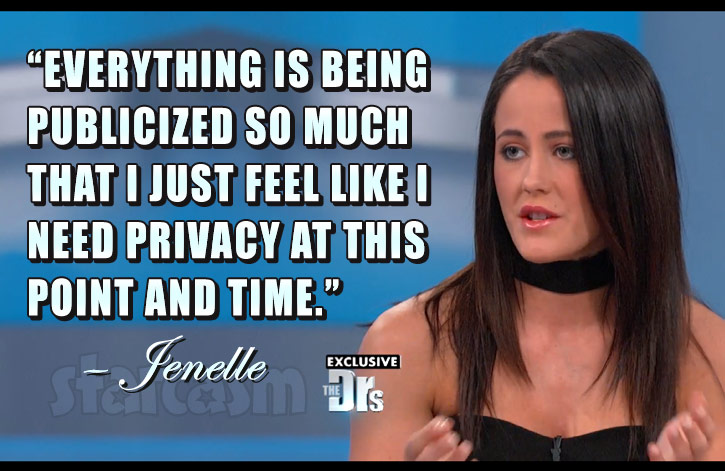 I know that’s one of the reasons why you wanted to come on our show, because we’re not really tabloidy. We’re The Doctors and I know you wanted some real answers and to explain exactly what was really going on. In general, before all this started, pretty good health?”

“Yeah, I was in pretty good health,” says Jenelle before going into the laundry list of symptoms described above that began in late January.

Jenelle was first sent to an endocrinologist for an evaluation. “Let me ask this,” Dr. Joseph Pinzone says to Jenelle, “Was there a date where you can pinpoint ‘this is the day it started,’ or did it come on gradually?”

“It kind of came on gradually,” says Jenelle, “but I noticed I smoked marijuana a long time — probably years and years and years — and then recently I stopped in about December. And then I noticed my symptoms coming on in the end of January.”

“Have you smoked it since then wit the idea of –”

“No,” Jenelle interrupts. “The reason I stopped is because I’m taking my own mother to court to get custody of my son back — my six year old — so I stopped smoking completely.”

Jenelle reveals that the last time she felt good was the beginning of January. She is asked about taking diet pills, and she says she did try them in November or December, but stopped. Dr. Pinzone says he thinks there are some real clues in what Jenelle said, but the next step was to wait on results from her blood tests. 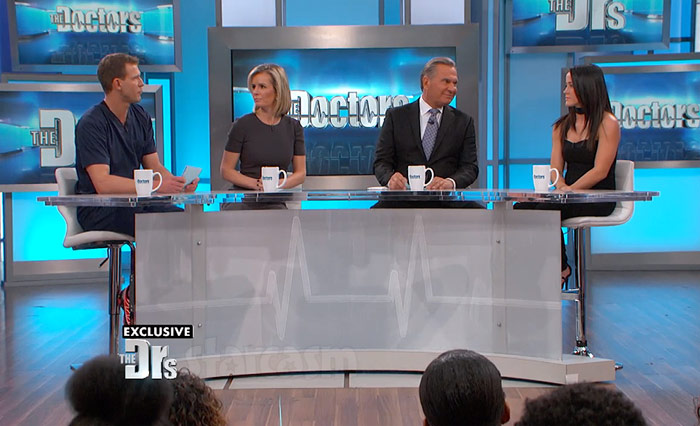 Meanwhile, Jenelle requested to see another OB/GYN so The Doctors set her up with Dr. Peter Weiss. “First, date of your last period?” Dr. Weiss asks.

“And you’ve been on this Junel [yes that’s the name of it] birth control pill for how long now?”

“Since November. Before that I was on the Nexplanon implant, and it was giving me a lot of mood swings and acne, so I had it taken out and I switched to the pill.”

“An how have you done since you’ve been on the pill?”

“I’ve been doing great. I mean, it’s really been working out for me. And then, all of a sudden, I haven’t had a period in, like, six weeks. Every time I have sex it’s painful.”

“And how long has that been going on?”

“For two months now. It hurts, like, up here,” Jenelle says as she points to a spot just below her navel, “I feel like it’s poking either my right ovary or my lymph node.”

Dr. Weiss says that he thinks he may know what the issue is, but he wants to look everything over before getting back to her.

Both Dr. Weiss and Dr. Pinzone join The Doctors cast and Jenelle to reveal what they thought was the source of Jenelle’s symptoms. The answer? They both came to the conclusion that the cause is the birth control pills Jenelle is taking. Dr. Weiss explains that some of her test results that seemed to show “normal” results were actually readings after the effects of the pill and did not reflect Jenelle’s actual, natural levels.

The Doctors’ OB/GYN Dr. Ashton addresses Jenelle. “I have to ask you, in terms of stopping the pill, are you planning any other pregnancies? Do you want to have any other babies?”

“Um, I definitely, well, maybe later on like a year or two from now,” says Jenelle. “I want to buy a house, you know, and get settled down and stuff like that. Because right now I’m in a neighborhood that’s just kind of — we’re all stuck together and in each other’s business. So, you know, when I settle down and stuff, yeah, you know, maybe then. But, not any time soon.”

Even if the root cause of Jenelle’s physical symptoms is the birth control pills, Dr. Stork still believes she should still address her anxiety issues because anxiety often serves as an exponent to numerous ailments. He recommends she get counseling, and Dr. Weiss agrees with.

Dr. Pinzone points out that there is another element to the equation as well. “In this case, there’s in fact two sets of substances that are going on” one that’s been added, and another one that’s been taken away. So, the taking away of the marijuana may certainly have some effects.”

He then details all that when on medically when Jenelle switched birth control methods with hormones, etc. (It’s a lot to try to type up, so you’ll just have to check out the episode!) 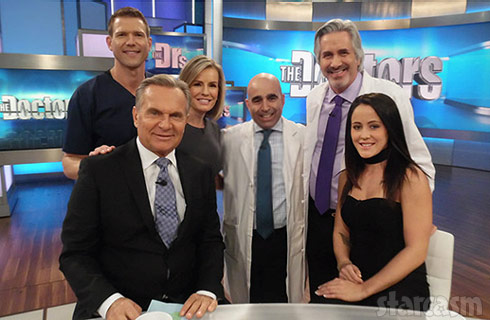 Dr. Ashton explains a little bit about the issues with birth control pills. “Birth control pills, while they are the same basic hormones your body makes, in my opinion, medically they are not one size fits all. They do need to be individualized, and Dr. Weiss and I, we can choose from 30, 40, 50 different doses and combinations, and it may be just a matter of finding one that’s for you. Or, it may be that you need to consider another form of contraception. This is where an ongoing relationship with a good provider is so, so important, and, as Travis said, and I echo this, and I can’t emphasize this enough, it’s not like you can have only one thing going on. So yes, you can have some hormonal issues, but also have some withdrawal issues. You could also have anxiety.”

Dr. Stork then reveals that they have set it up so that Jenelle can receive free weekly counseling for her anxiety issues for a period of six months at a center located in her hometown.

That’s pretty much it. Jenelle was going to stop taking the Junel birth control pills and see what happens. So far, we haven’t gotten an update from Jenelle herself, but we hope that changes soon!

Although our coverage of The Doctors episode with Jenelle was quite thorough, there’s still LOTS that we left out, so be sure to check your local listings and get the full story!

PHOTOS Jenelle Evans gets out of the hospital