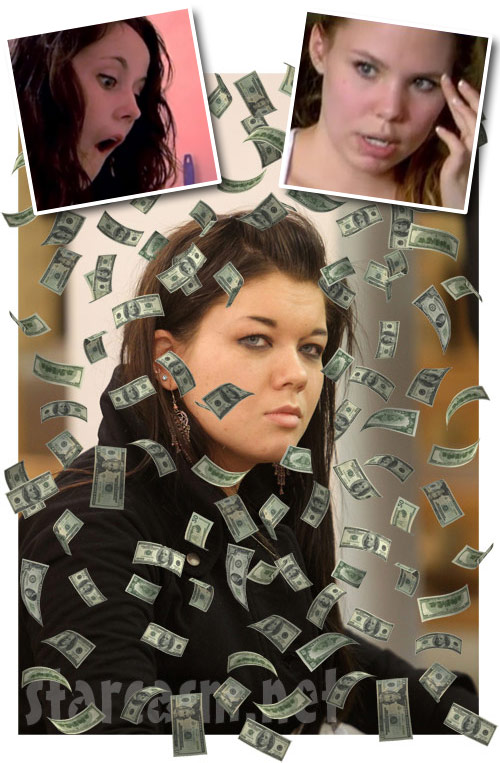 Sources close to Teen Mom 2 stars Jenelle Evans and Kailyn Lowry have revealed the two moms are making substantially less money than the girls from the original incarnation of the popular reality series!

Our fellow Teen Mom loving bloggers over at Hollybaby.com have talked to friends close to Jenelle and Kailyn and they reveal the two new reality superstars both pulled in only $9,000 for the first 12 episodes of Teen Mom 2. In stark contrast, Amber Portwood reported financial earnings of $280,000 for 2010 as part of her legal battles stemming from the felony battery charges filed against her.

“Things with Jenelle aren’t good. She has no money and can’t find a job,” as source very close to Jenelle tells us. “She is making around $9,000 for her first 12 episodes of Teen Mom 2, season 1.”

Another source close to Kailyn shares with us the same amount: “Kailyn is also making around the same $9,000 mark!”

Before you get too defensive on behalf of the newbie batch of Teen Moms, remember that Farrah, Maci, Catelynn and Amber didn’t start making a lot of money until their series was renewed for a second season. Given the popularity of Teen Mom 2 it is all but assured that they will be back for a second season and will more than likely receive a similar deal to the original four girls for the first Teen Mom.

I also have to assume that MTV is putting a lot of money into scholarship funds or savings accounts for the children, right? It makes sense in that it wouldn’t allow for the parents to blow all the money on fancy cars and plastic surgery while also keeping the girls strapped for cash so the show would maintain a bit of its authenticity. Harsh, I know, but true. (If MTV isn’t shelling out big bucks to the children they should be ashamed. These girls are generating millions of dollars for the network and they deserve to be compensated fairly for that!)

Oh, and Kailyn’s official Facebook fan page shared the article without comment, so take that for whatever it’s worth.