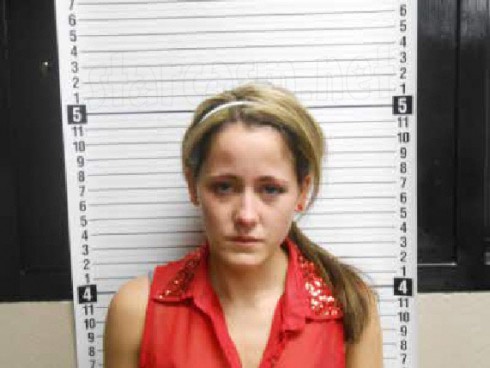 It’s almost as if last night’s episode of Teen Mom 2 was actually last night in reality. On the latest episode of the show, Jenelle and her then-boyfriend Kieffer Delp were seen struggling with drug problems. Jenelle was even recorded crying in the bathroom until Kieffer agreed to get her some “dope.” Now, after months of staying somewhat under the radar, Jenelle has been arrested and charged with heroin possession and assault.

According to online records, Brunswick County police arrested Jenelle earlier today and charged her with possession with intent to manufacture, sell and deliver heroin; possession of a schedule II controlled substance; and simple assault.

Her husband Courtland Rogers was also arrested on heroin and assault charges — click here for his mus shot photos. 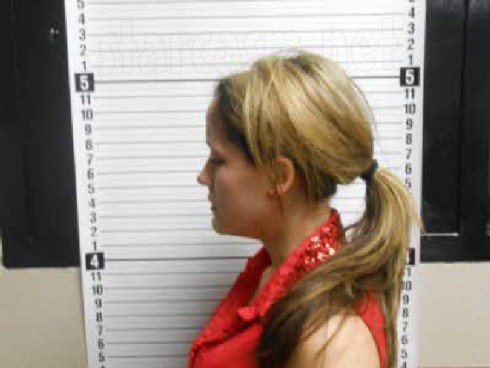 UPDATE – TMZ has obtained the official police report, in which it states that police were indeed responding to a domestic dispute between Jenelle and Courtland when drugs were found on the property. During the altercation Courtland allegedly assaulted Jenelle by “hitting her on the neck and striking her with a closed fist on her head.” Jenelle is facing assault charges as well for striking Courtland with a piece of furniture.

The police report states that there were 12 bindles (paper packets used for storing drugs) of heroin in the home, and since both Jenelle and Courtland denied ownership, they were both charged. Also, Jenelle was in possession of Percocet, plastic wrapping paper, and a glass smoking pipe, which is considered illegal drug paraphernalia, according to the documents.

Currently, Jenelle is serving a suspended sentence stemming from a simple assault conviction she received in 2011 after making a homemade fight video involving a couple other girls, which means if she’s found guilty, she’ll have to serve a 30-day jail sentence in addition to whatever sentence she’s given for the new charges.

It’s a bit surprising to hear that Jenelle had this sentence hanging over her head for so long. She’s been arrested multiple times since 2011, but because she was never actually found guilty on any of the charges, she’s avoided jail. Kudos to super attorney Dustin Sullivan! (I think Dustin is going to have his hands full trying to keep his perfect record intact now though.)

Jenelle is being held on a $20,000 secured bond for the criminal heroin and assault charges as well as a $260 cash bond for non-payment of child support.

Just last month, Jenelle entered rehab to treat her substance abuse issues but after just four days, she decided it wasn’t necessary. “I simply feel as if I didn’t need to go to treatment if my problem isn’t drugs anymore, and never will be again,” she said at the time.

After the Teen Mom 2 episode last night featuring Jenelle’s drug problem, she responded to fans on Twitter, assuring them the problem is behind her. “I’m doing great. Eating healthy. My weight is back to normal. I take Multivitamins daily and melatonin at night and I’m SOBER!” she wrote.

UPDATE – In what appears to be a pure coincidence, Jenelle’s ex-fiance Gary Head began serving his 7-day sentence stemming from prior DUI arrests this morning. (Click here for his mug shot photos and more details.) So, yes, it appears as though Jenelle, Courtland, and Gary are all in Brunswick County Jail together.