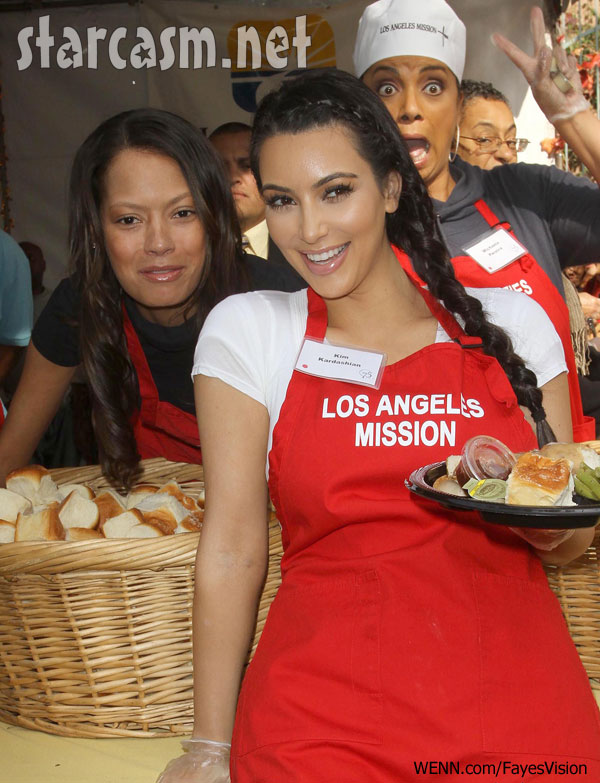 Kim Kardashian, still in a whirlwind of a major PR (and possibly legal) fight with ex-husband Kris Humphries, fed the hungry yesterday at Los Angeles Mission. She served up traditional Thanksgiving fixin’s with Jennifer Love Hewitt and Zoe Saldana, and posed for a ton of photos!

It was Kim’s first time at the mission, but a rep told US Weekly that Kim was “was very cordial and friendly,” and “worked hard in both the food preparation area and in serving the food to the guests.” 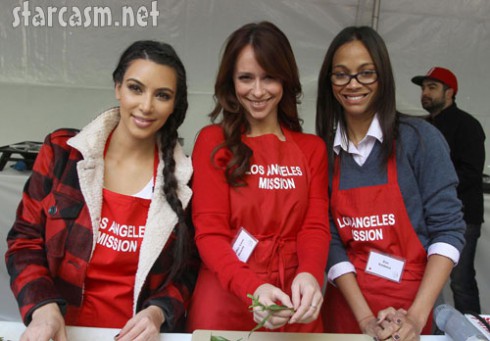 Charity photo opportunities can sometimes be a double-edge sword for celebrities, especially when they’re involved in scandals, and Kim is currentlydeep in a celebrity PR battle. Some will feel it’s refreshing to see Kim giving back, and others may doubt the genuineness in light of everything that’s going on.

Kim received major backlash from the media and public when she filed for divorce last month after only 72 days of marriage (and only a few weeks after their over-the-top wedding special aired on E!) causing many to wonder the sincerity of the marriage in the first place. Now, this Sunday, the public gets a chance to watch their marriage fall apart on reality television when Kourtney and Kim Take New York returns. Kim and Kris’ marriage crumbled while they were filming this show and living with Kourtney and her partner Scott Disick in New York. Promos show Kris telling Kim that everyone will forget about her when she moves to Minnesota and has babies, and Kim berating Kris for having to find out that he went to Canada via Twitter.

A source close to Kim told US Weekly that Kris was verbally abusive to Kim, and that he even called her famous behind “fat.” Kris’ camp seems to be saying that he never wanted to be famous, and the Kardashian reality machine was too much for him. What doesn’t add up with that story is the fact that immediately after marriage he was using the Kardashian name to promote club appearances, and just recently signed a $150,000 endorsement deal with Sector watches, something that definitely wouldn’t have happened without Kardashian fame.

Not only that, but Kris’ ex-girlfriend Bianka Kamper told In Touch that Kris used to call the Kardashian family “garbage,” and called Kim a “fake” who had done nothing but make a sex tape. Bianka says she was considerably shocked when Kris courted, and then wed the very woman he so vehemently made fun of.

The Parent Trap: Kim Kardashian shares first photo of Kris and Caitlyn together