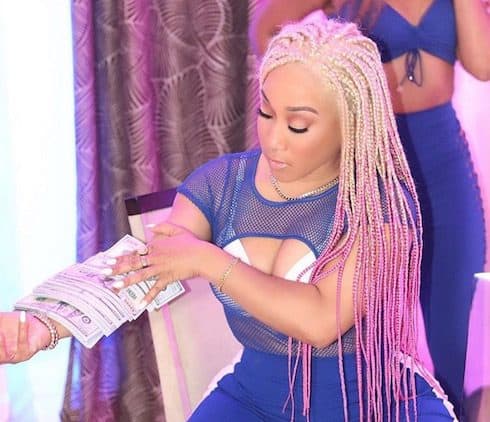 Though her exploits on the pole and in the studio made Miami Tip well-known before her recent turn into reality TV, there’s still plenty of misinformation out there. Is Miami Tip a midget? How did she get her nickname? And what’s her ethnicity? We’ve got the answers to all the most frequently asked questions about the legendary stripper and Love & Hip Hop Miami star — including, yes, her height.

It’s the most frequently asked Miami Tip question of all. She’s definitely shorter than average, but just how short is Miami Tip?

First of all, we should point out that “midget” is not the preferred nomenclature. Per the Little People of America, the word “midget,” dates to the freak show era of the 1860s, when little people were paraded about “for public amusement.” Unsurprisingly, “midget…has fallen into disfavor”; instead, “terms such as dwarf, little person, LP, and person of short stature are all acceptable.”

As for Miami Tip’s height, it’s also important to note that Tip herself has never addressed the topic or given her exact height in any interview we’ve read or heard. So what you’re about to read here is still just a guess. Having said that, here’s a still frame of Miami Tip rapping alongside Fetty Wap in the 2016 video for her track “Low Key”: 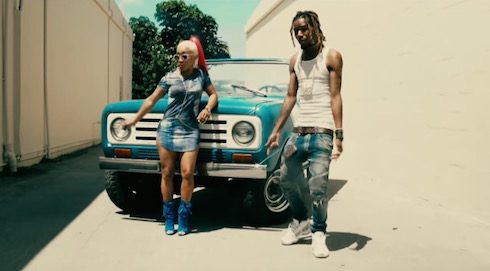 Fetty, according to just about every reputable source we could find, is about 6′ 1″. And though they’re not standing completely straight and right next to each other, based on the still above and Fetty’s entire sequence in the “Low Key”, it sure looks like he’s over a foot taller than Miami Tip.

The generally accepted height for dwarfism is 4′ 10″. So, depending on exactly how much taller Fetty is, it’s possible that Miami Tip technically qualifies as a little person.

How did Miami Tip get her name?

Miami Tip was born Kenisha Myree. She had at least one other alias when she started stripping, shortly after she turned eighteen. But, as Tip herself explained to VH1, Nelly’s highly NSFW and hugely popular video for his 2000 track “Tip Drill” was the game changer.

“My name when I first started was Fantasy Red,” Tip told VH1. “And then I went to Take One [a famously rowdy Miami strip club that’s been closed for several years] and the girls were like, ‘You dance real fast like the girls in the ‘Tip Drill’ video.’ I was like, ‘You know what, let me try it,’ and it just hit.”

What etnhicity is Miami Tip?

This one is easy. Per Miami, she’s a mix of “Puerto Rican and Black.”

What is Miami Tip’s net worth?

And this one is a little tougher to calculate. We don’t know exactly how much money Miami Tip makes from Love & Hip Hop Miami, since the newest franchise’s per-season and per-episode salaries have yet to be disclosed.

However, we do know that the regular cast members on the other shows reportedly make between $200,000 and $400,000 per season. (Love & Hip Hop Atlanta star Mimi Faust is said to be one of the franchise’s biggest earners, pulling in at least $20,000 per episode.)

Of course, those numbers are for main cast members. Miami Tip, as of LHHMiami Season 2, is the biggest name in the supporting cast — but she is a supporting cast member. Still, if she’s earning even half of the low end of the figures above, Miami Tip is making six figures from the show. A $100,000 salary split over the twelve episodes in Love & Hip Hop Miami Season 1 comes out to $8,333 per episode.

It might come as a surprise to hear this, but that’s actually less money than Tip made back when she was working the pole. Though her nemesis Jojo belittles Miami’s past as a full-time stripper every chance she gets, Miami Tip used to make $10,000 a night stripping at Miami’s best-known clubs.

One of the tricks that made her a stripping superstar was sliding down a 35-foot-pole from the ceiling to the stage at King of Diamonds:

But Miami was injured badly after falling while trying to do the stunt in early 2012. According to her friend, fellow stripper Skrawberry, Tip “was not drunk” and “her injuries could have been much worse had she not positioned herself correctly,” but her bones were “all fractured” and “felt like glass.” Skrawberry also told the Miami New Times that the fall was so bad she thought Miami Tip “was gone.”

In total, Tip lost a kidney and underwent facial reconstruction surgery. She had to stop stripping for two years to make a recovery — and that’s when Miami Tip started to pursue her music career in earnest. After her recovery, she told Above Average Hip Hop that her “near-death experience” left her feeling “like I need to tell my story, and the best way was through my music.”

Is the science of Gravity accurate? Could a scenario like that really happen?