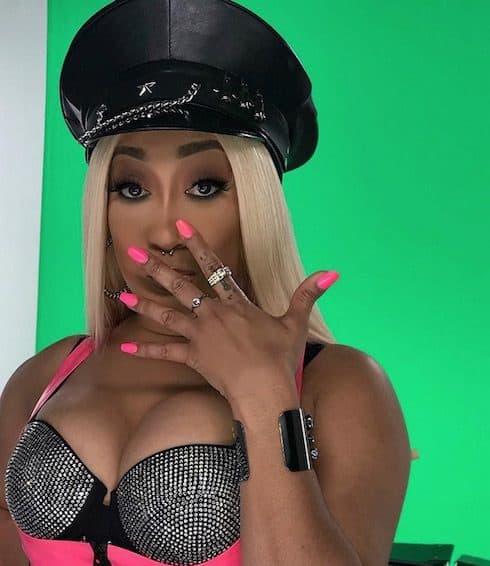 There’s definitely no love lost between Miami Tip and Jojo. The Love & Hip Hop Miami co-stars have been beefing for months. Jojo’s been accusing Miami Tip of riding her coattails for a storyline. She’s called Miami Tip a “bitter angry ass hoe” who just “makes sh!t up about” her and “tries to make her look bad,” and says Tip is just “mad.” And Tip definitely enjoys poking Jojo, whether on social media or in person.

And to be perfectly honest, it’s not really clear why the two of them are feuding so hard. They’re both friends with multiple cast members on the show, none of whom have any major (public) issues with each other yet. Miami Tip has alluded to some mysterious reason why Jojo knows she (Tip) keeps coming for her, but has only said that the truth will eventually come out.

In any case, Tip continued and maybe even escalated their feud on Instagram. following this week’s episode. She posted a pair of pics from a photo shoot in which Miami Tip was handling several snakes. In the first of the two shots — featuring a seriously impressive specimen — Tip wrote “I just got a snake I named it Jojo”:

I JUST GOT A SNAKE I NAMED IT JOJO ?

Tip got even more aggressive with her caption for the second pic, in which she never used Jojo’s name but referred to her co-star as “Beatdathoe”:

LIL BITCH FROM MORTAL COMBAT CALL HER “BEATDATHOE” ?? Styled by: ME

For her part, Jojo says she’s not bothered. In fact, she never even mentioned Miami Tip’s name (or spoke down about her former life on the pole) at all:

Fuck Em. They need to speak about you to get attention because if they talked about themselves nobody would give a fuck ??‍♀️

Miami Tip and Jojo clearly got to each other in the season premiere, though. In the “Check Yourself” episode featuring the Sister Time podcast scene, Jojo dismissed Miami Tip’s early departure with a wave, saying “Bye, b!tch, back to the strip club”:

Maybe the two just don’t like each other, but maybe we’ll get a longer explanation for their beef as the season progresses. Love & Hip Hop Miami Season 2 continues Wednesday nights at 8 on VH1.