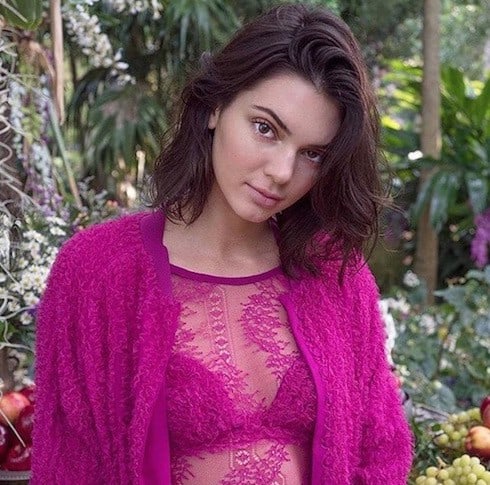 Kendall Jenner raised eyebrows when she jumped ship from Victoria’s Secret to highbrow Italian lingerie brand La Perla earlier this year. She also caused a bit of a controversy when it was revealed her contract with La Perla was exclusive–meaning she won’t be walking in the 2017 Victoria’s Secret Fashion Show later tonight.

The 2017 edition of the show has turned into something of a PR catastrophe–both model Gigi Hadid and performer Katy Perry were denied visas by the Chinese government, meaning the Shanghai-based event had to go on without two of its biggest names attached. So, in hindsight, Kendall Jenner’s La Perla contract either looks like a lucky move or an unfortunate one, considering she could have raised her still-ascending profile even higher by stepping into Gigi’s void.

But Kendall probably isn’t losing any sleep over the decision. The “boatload of cash” she’s said to have gotten paid upon becoming the exclusive face of La Perla lingerie reportedly involved a “multi-million dollar” figure. (And, as Jezebel pointed out, Kendall Jenner’s La Perla contract was only announced with a few weeks to go before the 2016 Victoria’s Secret Fashion show, meaning she was probably allowed to double-dip just the one time.)

But just how much is Kendall Jenner’s La Perla contract worth? Though the exact figures haven’t been publicly disclosed, we can piece together an estimate based on the dramatic escalation in Kendall’s net worth from 2016 to 2017. As we reported last year, Kendall Jenner’s 2016 net worth was between $18 and $20 million dollars–it had “nearly doubled” from 2015, thanks to an increasingly heavy modeling portfolio.

Since then, her modeling work appears to have plateaued. But the latest estimate of Kendall Jenner’s net worth, published by the British edition of InStyle just a few weeks ago, puts the figure at approximately 18 million pounds–or just a shade under $24 million US dollars.

Given that the Italian brand was by far the most high-profile of Kendall’s new acquisitions from late 2016 on, it seems safe to assume that the bulk of her net worth’s increase came from Kendall Jenner’s La Perla contract. That’s a lot of $924 garter belts for the company to push, but we’re betting Kendall’s 85 million Instagram followers can make up the difference.

Wearing the draped silk gown, @kendalljenner enters into a sultry, vibrant secret garden for the #LaPerlaFW17 Romance campaign. Online and in our boutiques.

How much money does the royal family make? Where does it come from? What do they do?

How much money does Donald Trump have?