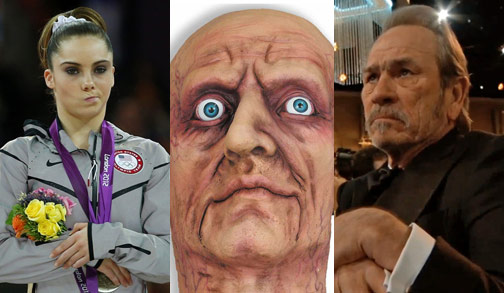 Officials at Chicago’s O’Hare Airport intercepted a package that contained 18 severed human heads back before Christmas. The package made some headlines considering the fact that, oh I don’t know, it was stuffed full of freaking severed human heads!!!

All of this fuss about the heady baggage apparently irritated Department of Homeland Security spokesman Brian Bell, who gave some seriously good and seriously “not impressed” quote.

“Everybody here is ‘Oh my gosh, you got a box of heads’ and everybody thinks that it’s unheard of. It is a potentially legitimate medical shipment. We’ve seen it at various ports in the nation.”

Dude! I understand that Brian deals with this kind of thing on a regular basis (actually I don’t fully comprehend that and the concept is disturbing frankly) but the guy’s a spokesman and he might want to give weight to the fact that some of us could find a package full of human heads a little sensational. And can’t you just hear the, “Oh my gosh, you got a box of heads,” part spoken in the voice of a child?

This disinterested knowledge drop reminded me of the “not impressed” meme, which shows no signs of slowing after it was first given life by Olympic gymnast McKayla Maroney, forever immortalized pouting with an unforgettable silver-medal stinkface. Now we’ve officially been given a random quote that equals the photographic glory of “not impressed” viral legends such as Grumpy Cat, and recently, Tommy Lee Jones at the Golden Globes

As a nod to Brian Bell’s gloriously dismissive quote, I honor him with the following (take it away Grumpy Cat): 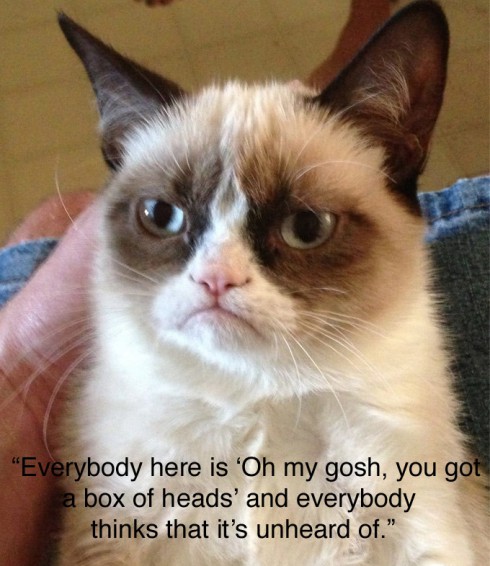 Thanks GC. I just so happen to be in the process of devouring The West Wing on Netflix streaming and this sooooo seems like the kind of unintentional publicity Sam, Leo, Toby and Josh would give C.J. flak over.

Oh yeah, it turns out Brian was right of course. The heads were being returned from Rome for cremation after they were used for medical research. They were in limbo because of a paperwork snafu.

Props to Gawker for the find and to Grumpy Cat for just being awesome.