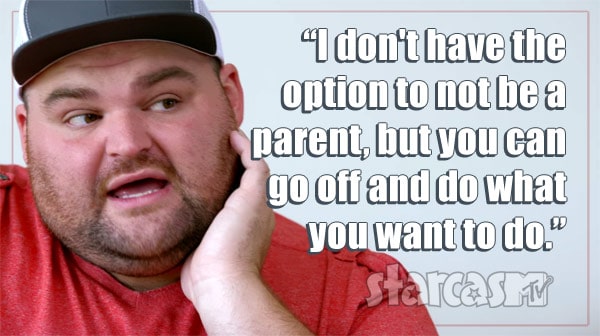 Teen Mom OG star Amber Portwood lashed out at her ex Gary Shirley and his wife Kristina on Twitter yesterday after getting a preview of last night’s episode of the show. We posted about the blow up, including Gary’s response, but at the time we still didn’t know exactly what it was that Gary and Kristina said that got Amber so irate. Now we do! Plus, Kristina took to Twitter to defend herself against Amber’s accusations and clarify the custody situation with her child from a previous marriage.

First up, we will provide a full transcript of the scene that (I assume) is what set Amber off. Since MTV teased the new episode with a preview clip of Amber taking a pregnancy test while on vacation with her new boyfriend Andrew in Hawaii, I assumed that the clip would be Gary and Kristina’s reaction to the pregnancy news. But, the scene is prior to Gary and Kristina finding out about the pregnancy, and is more about Amber entering a new relationship so quickly after breaking things off with Matt Baier.

The scene begins with Gary reading an online article about Andrew Glennon’s “shady past” on his phone. The article mentions that Andrew struggled with alcohol and depression that “nearly cost cost him his life.”

KRISTINA: Do you think that’s still an issue?

GARY: I don’t know. There’s more. There is a little more. There was a restraining order against him…that’s what it says. I don’t know what skeletons he has in his closet, but honestly, she should have waited. She should have taken more time with Leah and focused on her responsibility as being a mother than jumping into a relationship. Well, she was, like, “I was mourning.” I know that you’re sad after breaking up with someone — I get it.

KRISTINA: But your daughter can bring you just as much happiness.

GARY: Yeah…I’m sorry, but yeah. From day one I’ve been a parent! From day one my issues never came in and stopped me from being a dad, you know? I don’t have the option to not be a parent, but you can go off and do what you want to do. I mean, that would be f**king awesome! You know? And you’re OK with it because you’re used to it. But you know, there’s one person that’s not OK with it, and that’s Leah.

KRISTINA: It’s just like she told me, you know? “Matt was in the picture. Mommy broke up with Matt. Mommy don’t come around then because she’s too depressed.” But then, all of a sudden, she brings over Andrew and she says: “Well Kristina, if she was too depressed to see me, she wasn’t too depressed to find a new man?” And, you know, what do I say to that?

GARY: I was with her at one point and time and all she frickin’ did was sleep. She didn’t get up and do nothing. She’d wake up and Leah would still be in her crib, crying in a messy diaper and stuff, and no one’s taking care of her. I don’t know. It’s just — I just want my baby to be OK, to be happy, and to not have to worry.

As we reported yesterday, Amber not only went after Gary on Twitter, she also had some really bad things to say about Kristina — which Kristina has since responded to herself. Here are those tweets, including an intervention from Farrah Abraham’s dad Michael Abraham:

AMBER: Make sure to watch Gary and Kristina tonight talking sh!t about me! It must be hard making money off of me! Being such a bad mom and all. Where would they be? Wait..in a 1 bedroom shack in the ghetto of Anderson where he was before I got out and the show came back on!! Ignorant!

AMBER: You have no f**king clue what your talking about in any way!! [Kristina] broke up her family for money and tv! Her husband got a restraining order on her cheating @ss with multiple people and then cheated with Gary! What about her daughter? Straight out of Gary’s mouth!!

KRISTINA: Restraining order to keep my child from filming. I am an active mother to my children so quit hating. I’ve never stepped on your toes as a mother nor will I ever. I care for Leah when she is in our care. Love don’t hate ❤️

MICHAEL ABRAHAM: Kristina stay strong. DO NOT LET ANYONE BULLY you. You’r the real proven mother figure here. Gary has always been the rock solid father protecting his children with you in full support and I’m thankful to God for both of you – the world knows the truth and that’s pure FACT.

TWEETER: Kristina stay strong? Kristina go look for your own kid ! Yeah the one YOU ABANDONE for your boyfriend let’s try and give that advise instead

KRISTINA: I share custody of my oldest with her father, thank you for being so concerned! Know your facts!

TWEETER: Kristina didn’t abandon her kid… she has 50/50 of her child… but she is NOT allowed to be filmed.

TWEETER: Thats an outright lie gary claims to make them look better. Court docs are public. She has every other weekend only if mtv isn’t around. She isn’t just not allowed to film she can’t be present if mtv is there. So during filming she doesn’t really see her at all

KRISTINA: Check your info again, honey! I have my daughter daily and her father and I alternate weekends. Sorry to burst your bubble!

AMBER: Kristina shut up! You guys live off of me and my success! Sit back and enjoy the paycheck.

TWEETER: Y’all.
Kristina has a daughter.
She shares custody with her ex husband.
Ex didn’t want her on mtv (good choice probably).
Judge restrained filming on daughter.
The end.
Not a big deal. Pretty normal divorce agreement for custody.
?? #TeenMomOG

TWEETER: Didn’t she cheat with Gary and leave her husband for him?

TWEETER: Yes she did. And she doesn’t have split custody. Her court documents are public. Dad has primary custody she has weekend visitation only if MTV crews aren’t around. 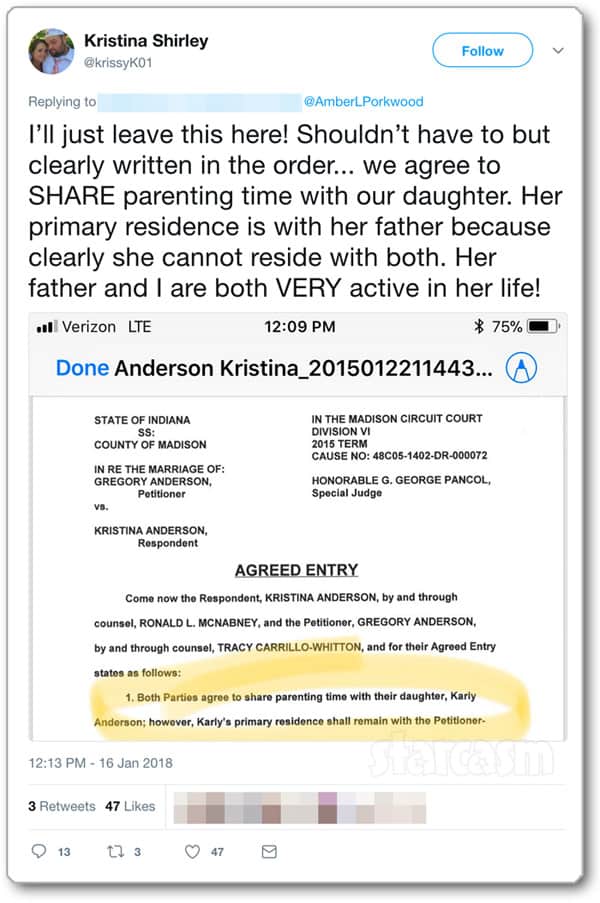 KRISTINA: When both parents are active in a child’s life why not share 50/50. Let’s just say it’s much easier on the child to see BOTH parents equally.

TWEETER: I was extremely disappointed when I heard the rumours you were not on your daughters life much, especially after seeing you be such a great parent on the show. Thanks for setting the record straight

KRISTINA: I normally stay reserved about my personal business, however when people decide to put false statements out because they live my life apparently…. I’ll stand my ground because I’m NOT a dead beat mom.

TWEETER (to Amber): Your child should be your #1 priority. You don’t need permission to be a parent and you sure in the hell don’t get a time out from being one. A man shouldn’t give you a reason to live, your daughter should be the breath inside you. Good thing she has a wonderful stepmom.

AMBER: I went to prison just to get clean for my daughter..I literally opted out of drug court because it wasn’t helping! I begged and begged to bring my daughter to school and pick her up constantly and was always told No! I tried repeatedly and fought for her!! Stfu!

I am guessing that Gary and Kristina will find out that Amber is pregnant again in next week’s episode, so we can expect more fireworks on Monday. Stay tuned.

TWEETER: This drives me nuts like why does he have to drop you off and pick you up? You can’t drive yourself you’ve known this guy for like 5 minutes and he’s driving your car and hanging at your house while your gone? Wtf

AMBER: Because we had errands to run right after you idiot stfu! Get a life! Why are you on Twitter talking crap weirdo? I shouldn’t even have to explain that lol

TWEETER: Christina made the remark let’s adopt Leah that was so wrong so wrong

TWEETER: No it wasn’t. Amber isn’t a mother to her.

AMBER: How am I not a mother? Because I did a show during her summer break and was in LA for 3 weeks making f**king money to take care of my child while they sat on there a** doing nothing? I wasn’t even home I was filming Boot camp! I was right there for Leah.

AMBER: Ugly ugly disgusting person you are! You have a baby as your picture! You want them to put people down like You! Horrible person! Assuming like an idiot!

AMBER: You guys are f**king gross! Pray you never meet me! Focus on your life!

AMBER: Some of you are absolutely horrible people! I was in boot camp for 3 weeks during leahs summer break making more money than some of you sh!t talkers dream of!! My kid has college funds because of me! F**k off lol

AMBER: No that doesn’t seem to work sweetheart. It’s not the real world!

TWEETER: Hold your head high and don’t ever let anyone bring you down. ??

TWEETER: After all the old saying is: Sticks and stones may break my bones but names will never hurt me. No bones were broken only your heart and image you are alive so this is a learning curve. Learn from it and move on. ?

AMBER: But you cannot just let people get away with saying whatever they want. I have to use a my internal filter constantly! I’m 27 years old defending myself for being gone and making a living. It’s truly disturbing anymore!

TWEETER: @AmberLPortwood i’m so shocked at all the abusive comments you get about your depression. You and cate inspire me so much! I deal with depression & anxiety too it must be so hard dealing with it in the public eye. Be proud of yourself though. You’re amazing ❤

AMBER: If I would have done what Cate did then I would have been praised for it. But if you do it alone your just a horrible person. It is wrong to do that to women and mothers!

AMBER: Taking a long needed break from social media and focusing more time on positive energy and low stress for me and my baby? Sending all my love??