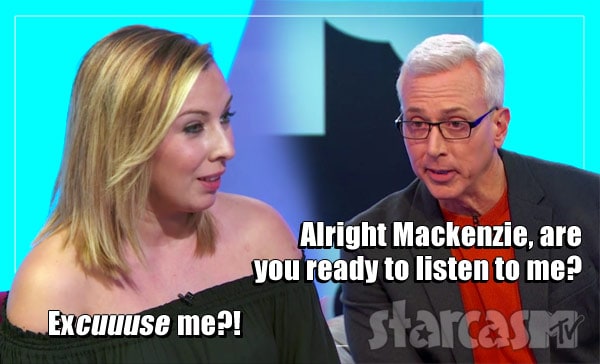 Part 1 of the Teen Mom OG Season 7 Reunion with Dr. Drew did not go well for Ryan Edwards and his pregnant wife Mackenzie Edwards. Mackenzie revealed that she felt MTV portrayed her wedding in a much more negative light than some of the other Teen Mom ceremonies they’ve featured, and Ryan got so worked up that he refused to join his ex Maci McKinney for a scheduled discussion with Dr. Drew about the issues the two continue to have co-parenting their son Bentley.

Judging from a brand new preview clip, things don’t get any better for Ryan and Mackenzie next week as Dr. Drew gets quite stern with her about Ryan’s post-rehab treatment for drug addiction:

After Mackenzie expresses her frustration at what Dr. Drew had to say about Ryan taking suboxone and/or methadone, Dr. Drew tries to interject but Mackenzie just keep talking. Dr. Drew gets a bit uncharacteristically aggressive as he interrupts her:

DR. DREW: Alright Mackenzie, are you ready to listen to me?

DR. DREW: If a doctor prescribed it — Mackenzie, are you listening to me?

DR. DREW: If a doctor prescribed it — not him taking it as he needs it — if a doctor prescribed it and he were following those directions to the letter, then I could argue to Maci that he’s under doctor’s prescription, he is following it to the letter, you can check with that doctor and that doctor will take responsibility for any problems. But, if he’s taking it ad lib, I can’t — I can’t vouch for that. That’s a tough thing to vouch for.

MACKENZIE: I don’t think you could vouch for anything Ryan does, honestly. But that’s just my opinion.

DR. DREW: Well, his doctor could. That’s the point. And I certainly…if he’s not doing treatment, he needs to be on medication management because it’s very dangerous otherwise.

RYAN’S MOTHER JEN: And he is.

For the rest of Ryan and Mackenzie’s appearance (as well as that of Maci, Amber and even Farrah), be sure to tune in to the Teen Mom OG Reunion Check In With Dr. Drew Part 2 airing Monday night at 9/8c on MTV!