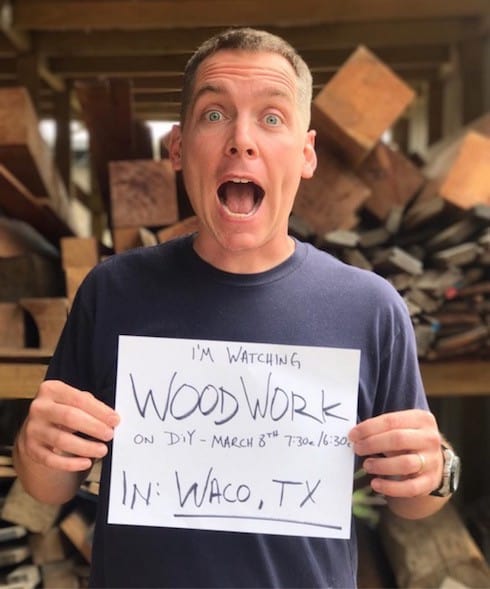 Fixer Upper‘s carpenter extraordinaire finally has his spin-off! Wood Work, Clint Harp’s second pilot episode in as many years, is set for a major premiere *tonight* at 7:30 PM EST on DIY Network. That’s right: You can tune in tonight, March 8th, and watch Clint’s year-plus of extra effort get its big reveal!

Devoteés will recall that Clint actually shot another pilot for the network. That effort, Against The Grain, aired last summer, to great fanfare–and got at least one encore presentation, which is generally a good sign. It seems that the network wanted to retool a few things, though, but now Clint is back with his second take. And, judging by DIY’s description of the episode, things could get uncharacteristically tense:

The Harp Design Co. simultaneously works on two orders with tight deadlines. After a wedding venue orders tables for their grand opening, a former client orders two large moveable tables for the opening night of a Waco distillery’s tasting room. With so much to do in such a short time, will the team be able to get everything done with the old soul and craftsmanship they apply to everything they do? If not, there may just be countless angry brides and whiskey drinkers at their doorstep!

For such a high-energy guy, Clint’s official social media announcement for Wood Work was actually a bit understated: just the episode preview from the man’s own DirecTV menu. But there’s no better way to prove that your show really does exist than by showing the world its cable listing 😉

There it is. #WoodWork March 8th, 7:30e/6:30c on @diynetwork. I love the description…"The TEAM races…" I'm so excited for you all to see the work that @kellygharp and I do together with our team! The first episode of hopefully many. #pilot #lovebuildrun

Plus, Clint has been teasing the show for months, always referring to it as a “project” for DIY and generating curious buzz:

Gettin it done on camera today! Busy week of shooting. So proud to do this with the most amazing team out there…and so pumped that you're going to see them too! @diynetwork @highnoonent @harpdesignco #staytuned #comingsoon #lovebuildrun

Back to filming for the @diynetwork today…can't wait for you guys to see the finished product! One reveal down, and one to go!! #staytuned #lovebuildrun

Well that's a wrap! Yesterday we finished filming our project for @diynetwork …what a final push! @kellygharp and i couldn't be prouder of our entire #hdc team and @highnoonent film crew. There were an insane amount of pieces built for one episode and I loved every single one….but I love them because i know the story behind each of the incredible hands that built them…they are what's amazing to me. It's out of our "control" now as we wait to see the finished product and see if there will be more! Your support means everything to us and we're just so thankful. I have no real details yet that I can give you but i wish i could. And many of the questions you have, we have too! So when we know, we'll tell you! Until then it's back to the shop. We're getting back to it, and also counting down to Season 4 of #fixerupper on @hgtv which is coming soon! #leftitonthefield #lovebuildrun

Congrats to Clint, his wife Kelly, their kids, and the whole Wood Work crew! Hopefully this one gets picked up for a full season 🙂

You can follow Clint Harp on Instagram here. Wood Work gets its world premiere Wednesday, March 8th, at 7:30 PM on DIY.

Former LHHATL star Joseline Hernandez is getting her own reality show on WEtv: Will you watch?