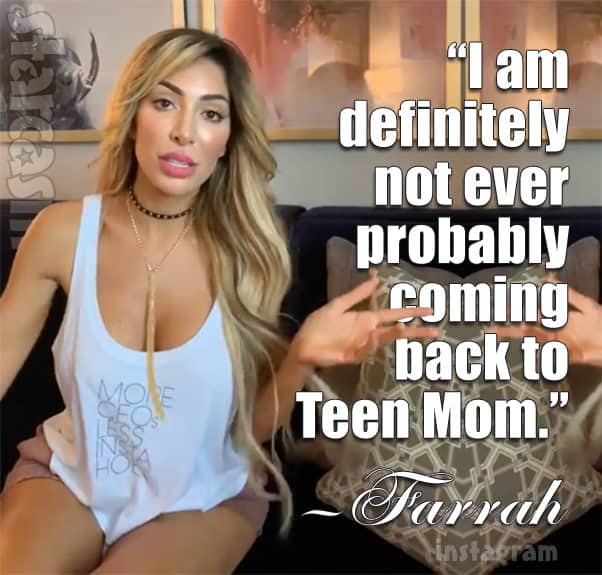 The social media accounts of the stars from the various Teen Mom shows have been jammed up over the past week with sponsored clickbait links suggesting that Bristol Palin quitting Teen Mom OG might open the backdoor for Farrah Abraham to return to the show. Farrah herself took to Instagram to address the rumors, as well as Bristol’s departure.

“I was reached out to by E! this week because I guess someone has left Teen Mom OG, the show that I started — 16 and Pregnant — way back when,” Farrah says in the video (included below). She then says of the show: “We all LOVE it!” while making a heart with her hands — a far cry from what she was saying about it 18 months ago.

“So, I wanted to just respond from all the E! News and everybody else, and put it here on postd.io for you. I am definitely not ever probably coming back to Teen Mom. I have so moved on, and I think it was such a great way to move on.”

Farrah then addresses some of the unpleasantness surrounding her departure from the show:

Between all the lies and the conspiracies, and every other thing that happened when I left Teen Mom — I definitely wasn’t fired. I’ve never been fired. I think some of the producers have an ego, and, you know, I’m thankful to the crew that doesn’t sell out their talent, that takes care of them and that love them. But, there’s far and few and that doesn’t really exist, and as a mom — a single mom — I wanted to raise my daughter around some more ethical people. So, better ethical people.

So, me and my thoughts on someone leaving my position. I have to say I think that’s best. If you guys are, you know, you guys enjoying my “Ambition Into Reality” Master Class, you ladies and gentlemen know if you can’t find your balance and be mindful of what’s going on in your life and you have to leave something, I totally respect that and I understand that. I think that’s what happened in this case.

FARRAH ON GETTING HER OWN SHOW

I love you guys, because every time I’m in an airport, wherever I am, you all are so amazing. And you guys who love watching my Instagrams, my YouTube channel — and I know you guys all want me to have my own show. But, I’m really creating and waiting for the right time for that, and maybe it’s not yet.

Will I ever be back to Teen Mom ? http://bit.ly/2IjKlJJ

Farrah Abraham was faking her cry face, and other revelations from Teen Mom Confidential