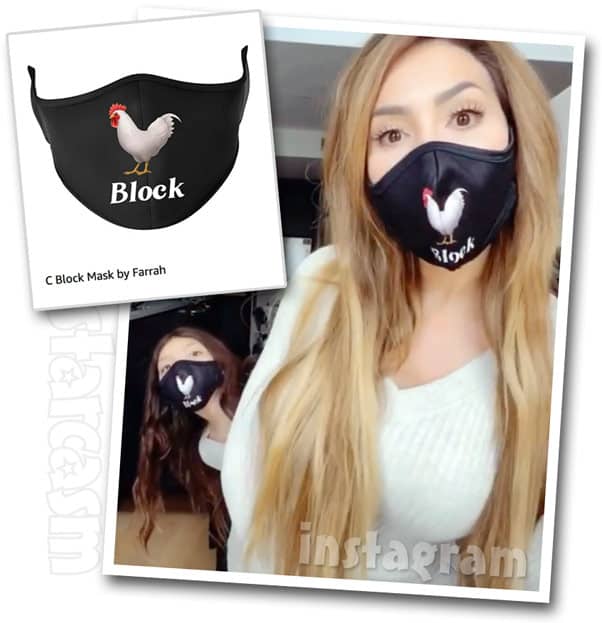 Former Teen Mom OG star Farrah Abraham isn’t about to let sheltering at home with her daughter during a global pandemic keep her from stirring up controversy! Two days after Sophia Abraham released a music video for her song “Take Yo Bestie” that sounds A LOT like a previously released song by Mahogany Lox, Farrah shared a video of herself and Sophia wearing Farrah’s new line of masks — including one that seems very inappropriate for a child.

The mask in question features a large image of a rooster with the word “block” underneath. The mask is described a “C Block Mask” on amazon, and it is a clear reference to the term c*ck block — which becomes a very mature joke when used on a mask covering a person’s mouth.

Farrah shared a montage clip of herself and Sophia wearing numerous examples of the “masks by Farrah” currently available on Amazon, but only the “C Block” mask has an adult theme.

If you’re curious, here is the full line of masks by Farrah currently available on Amazon for $19.99 each plus $4.49 for shipping: 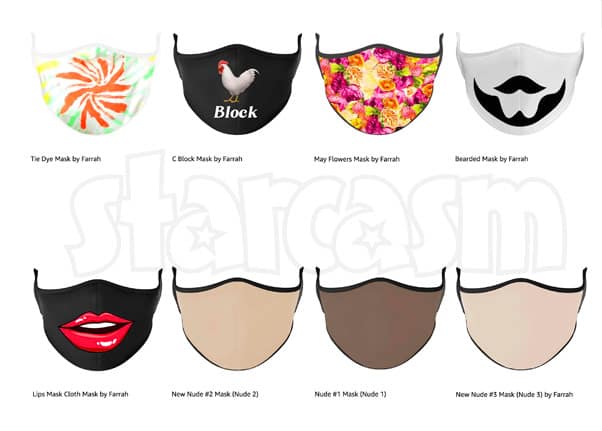 Devout Farrah fans noticed that her tie-dyed mask is the exact same pattern as the matching tie-dyed Reinders outfits that Farrah and Sophia wore out for a photo shoot last month. It’s unclear if Farrah is officially partnering with Reinders on the masks.

Others online have pointed out some similarities between Farrah’s “Lips Mask” and the controversial Balaclava knit top by Gucci that the company stopped selling after backlash over its resemblance to blackface.

Long-time Farrah followers will see the “Lips Mask” and instantly recognize a missed opportunity here. How could she not offer a mask featuring one of her botched lip injections photos that went viral a few years ago?!

Just swipe the gallery below to see what that would look like:

Former #TeenMom star @FarrahAbraham is selling masks now, but I feel like she's missing a great opportunity by not offering a swollen lips version in honor of her infamous #botched lip injections a few years ago. 😷👄 #TeenMomOG

In addition to the masks, it appears that Farrah may soon be selling some of the leftover stock from her closed Furnished By Farrah retail store in Texas. Here is Farrah’s description of her recently launched Amazon seller account that includes the Furnished By Farrah logo:

All things hand-picked by Farrah Abraham, created by one of the most well-known, top female celebrities in the nation. Farrah wanted to make a one-stop shop for everyone who is in the pandemic together, homeowners, designers, home builders, and stagers creating a more efficient and greater customer experience. This professional store provides a variety of products available while quantities last; face masks, clothing, furniture lines and create a lifestyle brand going beyond traditional stores to keep up with the demand.

“Through all of my life’s diversity, being a businesswoman and providing for communities and quality shoppers as myself, have proven to be one of the most important essentials in my life and I look forward to working with a variety of shoppers world wide from families to large real estate investors and give them the best price as I appreciate a deal equally as my clients do too.”

Thank you for welcoming these hand-picked items into your home!

The controversial mask clip featuring Sophia isn’t the only Instagram post folks are buzzing about. There is another video posted to Sophia’s account that is also raising a few eyebrows. I’ll just share it without commentary:

#takeyobestie over to #TikTok and check this out 💕💕💕 #fyp wearing @reindersjm