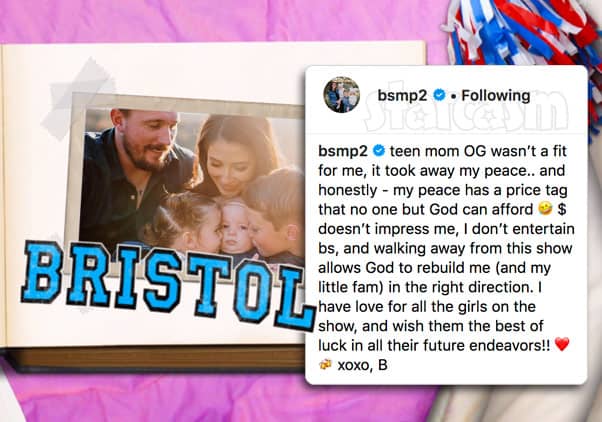 Bristol Palin sparked rumors late last week that she might be quitting Teen Mom OG after two seasons during an Instagram Q&A session, and moments ago the 28-year-old mom confirmed that she is leaving the show.

“Teen Mom OG wasn’t a fit for me, it took away my peace,” Bristol began her announcement on Instagram. “And honestly – my peace has a price tag that no one but God can afford,” she added, along with a laughing ? emoji.

“$ doesn’t impress me, I don’t entertain bs, and walking away from this show allows God to rebuild me (and my little fam) in the right direction.”

Bristol is quick to point out that her leaving the show had absolutely nothing to do with her co-stars. “I have love for all the girls on the show, and wish them the best of luck in all their future endeavors!!” she wrote, before signing off with “❤️? xoxo, B.”

Given that it is April 1, many were speculating if perhaps this announcement was just and April Fools’ Day prank. “People are going to think [that],” Bristol replied in the comments, “but 100% not a joke HA ?”

The announcement comes just a few days after Bristol was asked about her future with the show during a fan Q&A in her Instagram story. “Will you stick with MTV after the way producers portrayed you?” a fan asked. Bristol did not respond, but merely shook her head.

Another fan asked “Did you love being on reality TV as a career?” Bristol furrowed her brow and wrote: “100% not my career.”

Bristol previously lashed out at MTV and producers for how she was portrayed during her first season on the show, and her decision to come back for another go was a surprise for many fans. “MTV doesn’t want to talk about faith, show work ethic, or juggling three kids alone, they don’t want to show the humble process of starting over after a divorce, building a career, or any real life issues,” Bristol wrote after last season. “All they want with my little segment each week is some fake fill-in Farrah Abraham/Jerry Springer BS, and it’s simply not true.”

One week after ex-husband @Dakota_Meyer said #TeenMom had become a "trailer trash Real Housewives," Bristol Palin lashes out at @MTV for how they portrayed her this season #thatdidntgowell https://t.co/JKAVCYCtHO

Meanwhile, the wife of Bristol’s ex Levi Johnston also hinted that perhaps the Palin’s stint on MTV might be over with a post last week. In her own fan Q&A on Instagram, Sunny Johnston had this interaction:

QUESTION: Will there be a new season? Would love if they would show more of your personalities!

SUNNY: We got the phone call that Teen Mom is over for our story but we will see how another project is coming along to where that might be possible! They have chosen not to air so many cool things we’ve filmed! It’s crazy.

Bristol’s outspoken husband Dakota Meyer has yet to say anything about their departure from MTV.

TEEN MOM Josh is with Mackenzie McKee in Florida; are they back together?