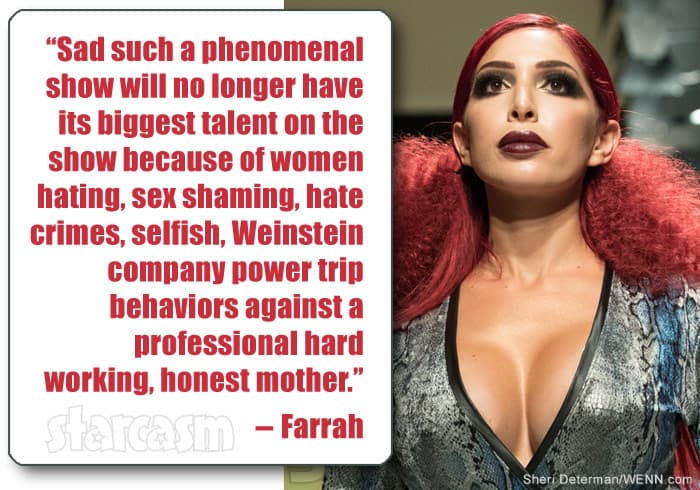 On the same day that MTV released the preview trailer for the new season of Teen Mom OG, star Farrah Abraham says they fired her from the show!

Farrah made the big announcement on social media, and says it was over her scheduled live stream on CamSoda Monday night. Her return to CamSoda made numerous headlines over the last couple of weeks because Farrah was reportedly going to be using an@l sex toys as part of the show — and according to the reality star, it was that fact that got her fired.

Farrah was promoting her CamSoda appearance on Instagram Live when she told viewers that she was having a bad day because MTV had just fired her from Teen Mom. She accused the network of “sex shaming” her and said that the firing was because of her CamSoda show.

UPDATE – Farrah just WENT OFF on Viacom the parent company of MTV, on Facebook. Here is what she posted along with the brand new Teen Mom OG trailer:

Even though #Viacom fired me today they couldn’t help but to exploit myself & my daughter for their promotional gain- Viacom let me go because as a Business Mogul I act like an adult and part take in adult promotions and activities that other adults do for FREE or in private ! Even though I have successfully been to gentlemen’s clubs appearances they filmed and Viacom filmed me at the AVN’s & Viacom shows and glorifies showing couples having sex on their network but as stated today “my brands press out shines the Teen mom Viacom press”- Sad such a phenomenal show will no longer have its biggest talent on the show because of women hating, sex shaming, hate crimes, selfish, Weinstein company power trip behaviors against a professional hard working, honest mother. I’m proud of myself not giving in to be sex shamed by Viacom network, Proud to not have a network take away financial opportunities for my goals, proud to be an Advocate for a healthy sex life, safe sex, teen pregnancy prevention and so much more while I run companies in different feilds and scale them. Cheers to basically winning against hurtful disgusting executives who do way more in their personal lives then what I could ever be judged for-I will never be broken by hateful wrong people and if everyone else is brained washed, on drugs, pills, scheming thinking their at the top of their power trips I WISH to always be apart- I give this chapter of my life to GOD & all of his glory & to justice in court. If God’s for you who dare be against you. I look forward to writing my first business book and sharing all of these life changing experiences in detail , from scheming producers & executives to jealous celebrities ,what to do to over come , not be shattered & stay true to the free world we live in ! #USA #AMERICA Get out there a keep being you! Your much better then all the politics & the people at the top who could never be at the top if it wasn’t for you! #godisgood

Despite the firing, Farrah stated that the show must go on and she still planned to do the live stream.

BUTT (heh heh), Farrah later bailed on her CamSoda show and shifted the blame to them for misrepresenting what the show was going to be! (Before I share her video, I should point out that Farrah was going to be donating the tips she received to charity. Also, she was launching her own line of lingerie with Pulchra and was going to be giving out free sex toys and lingerie to the biggest tippers.)

Stand for what is right! Big tippers! Charity! & A healthy Sex Life! I support all the webcam community earning money pic.twitter.com/vLgMAve4tq

I do greatly apologize for Scott and Molly over-compromising themselves or CamSoda,” Farrah says in the clip, referencing the two people she was working with at the website. “There wasn’t an an@l show,” she says, “we were giving away an@l toys and fun lingerie.” 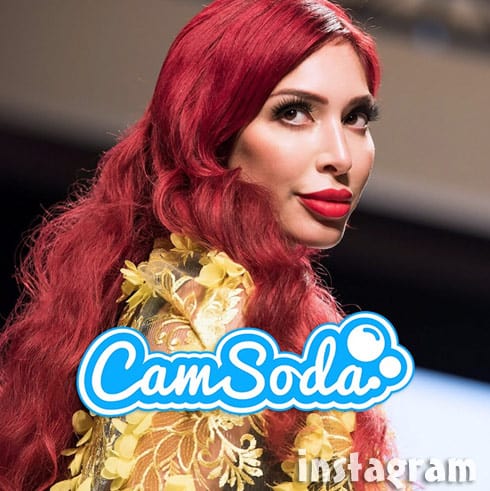 Here is Farrah’s caption from the video posting on Facebook:

Stand for what is right! Big tippers! Charity! & A healthy Sex Life! I support all the webcam community earning money & to Scott and Molly at @CanSoda.com or should I say SCAMSODA taking advantage of their celebrity guest and not taking the blame who lied in press im sorry as they over promised! Again Scott & Molly returned many of their friends tokens so it could not go to hard working foundations for Safe Sex & bigger causes- I truly stand by great causes & wish you all would do the same #EndSexShaming #WomenEmpowerment #GirlBoss -Webcam workers beware – ❤️❤️❤️ Had a Blast for the right reasons ! #camsoda F**K ANY ONE WHO TRIES TO TAKE ADVANTAGE OFF YOUR GOODNESS! STEALING CHARITY MONEY WOW CAMSODA!

Hmmmmm… Could it be that Farrah pulled out of the CamSoda show to save her spot on Teen Mom OG? Surely she couldn’t have been blindsided by the expectations after all of the publicity — including TMZ? Either way, the end result was A LOT of disappointed folks who shelled out a lot of money to watch Farrah put things in places. As you might imagine, the CamSoda live feed was PACKED with angry comments and people demanding their money back.

So what do you think — would MTV firing (or threatening to fire) Farrah over a potential live stream in which she payed with an@l toys be justified? I assume that there must be something in the contract that allows them to do that? Something that her last live stream didn’t trigger for some reason?

Hmmmmmmm… It just occurred to me that perhaps Farrah insisting that her sex tape with James Deen was not something she shot with the intention of putting out was just a way of avoiding violating some sort of clause in her contract that forbids pornography? That would certainly explain why she has so adamantly insisted that it was a private sex tape despite all the evidence to the contrary!

OK, now I’m going to go ponder what Teen Mom OG would be like with Farrah for an entire season… (Perhaps Teen Mom 3 star Mackenzie McKee will be getting called up to the Majors again like her co-star Briana DeJesus?)

Are you more or less likely to watch #TeenMomOG without @F1abraham? Take the poll!

UPDATE – By the time I finished this post I could no longer find Farrah’s video in which she announced she was fired. Could it be that pulling out of the live stream saved her job? Oooo – she just tweeted a link to the new Teen Mom OG trailer and wrote “OG FOR LIFE!”

Uh oh. Farrah just WENT OFF on MTV’s parent company Viacom! (Included in the post above)