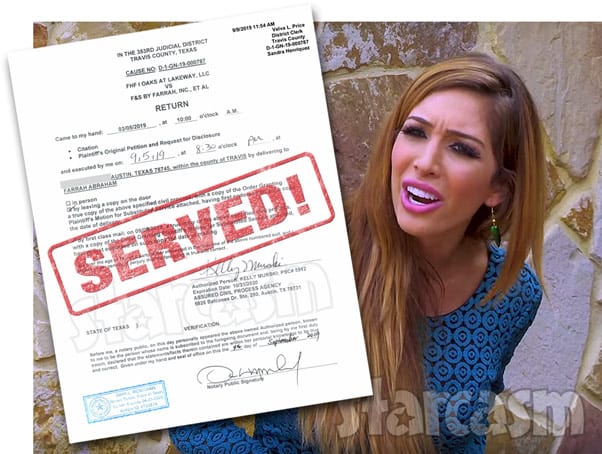 Former Teen Mom OG star Farrah Abraham and her ex Simon Saran were both sued back in February for more than $100,000 in unpaid rent after her Furnished By Farrah and Sophia Laurent Children’s Boutique allegedly broke their leases when they closed up and moved out early in September of last year. The lawsuit has been completely stalled, however, thanks to Farrah’s “transience” and the inability of her former landlord’s legal team to locate her and officially serve her with the documents.

That all changed last week when Farrah was finally officially served after a judge agreed to let the process servers leave the papers at her dad Michael Abraham’s house in Austin, Texas.

According to court documents, a copy of the Citation, the Original Petition, and the Request For Disclosure were left on Michael’s door at 8:30PM on Thursday, September 5. The Return Of Service was officially filed on September 9, which should clear the way for the lawsuit to move forward.

Farrah first announced her foray into furniture retail back in March on 2016. Initially launching online, the Furnished By Farrah brick and mortar store just outside of Austin had its official grand opening in November of 2016. Right next to the furniture store was the Sophia Laurent Children’s Boutique, which had it’s grand opening celebration on the same day.

The two stores remained open for roughly two years before quietly shuttering their doors with little fanfare. We were the first to report on the store closings with confirmation from Farrah’s dad Michael. “Yes, they have been closed since the end of September when the property leases ended for rent organization,” he told us in November.

It seems there was some confusion over the lease agreement, however, as The Oaks at Lakeway filed a lawsuit on February 13 claiming that Farrah and her company, F & S By Farrah, signed five-year leases on both locations. The suit demanded at least $101,212.50, and also named Farrah’s ex Simon Saran. It’s unclear what Simon’s involvement is. Perhaps he cosigned on the lease?

We will continue to monitor the case and will update if there are any more major developments.

PHOTOS Farrah Abraham and Sophia at the VMAs