The British tabloids have been on top of Elizabeth Hurley almost as much as I’d like to be recently for an alleged affair with Australian cricket pro Shane Warne.  Innuendo was flying left and right about random secret rendezvous with the whole story exploding recently with a report that the two were spotted sneaking into a London hotel together. All of these reports forced the hand of the British bikini bombshell as she took to her Twitter account of all places to announce that she had split “weeks ago” with her husband Arun Nayar. 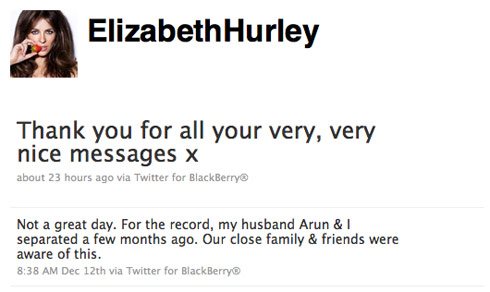 Well we’re glad that family and close friends knew about the split before her “Twitter family” did!  Nayar was a mega-rich entrepreneur who’d made his fortune in the textile and software industries.  The two married back in 2007 in an over-the-top two continent ceremony.  Hurley is a mother of one, an 8-year-old son Damien with another ex-husband rich guy Stephen Bing. Here’s a picture of the couple back when they were a happy couple:

This news would have given millions of single men hope except for the fact that she was outed by already being involved with some dude who bats his balls for a living.  It’s a hard world for the working man.