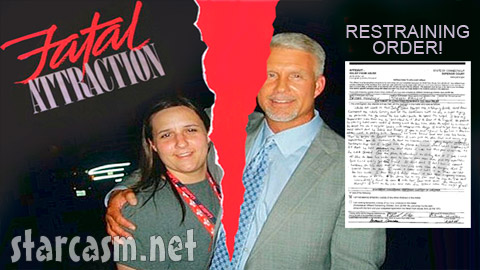 Check out this photo and complete transcript of the restraining order taken out by ESPN production assistant Brooke Hundley against her superior and reported lover ESPN analyst and former general manager of the New York Mets Steve Phillips.

The document bloodhounds at TMZ turned up this gem, filed in Connecticut on August 20 of this year – just one day after Brooked dropped off a letter addressed to Steve’s wife Marni Phillips declaring that Steve Phillips and Brooke were meant to be together. The letter was left at the Phillips’s residence and Marni reportedly saw Brooke just after she put the letter in the door. Marni told police, “I immediately called 911. She got in her car, put it in reverse and smashed the rear end of her vehicle into the stone column.” (Listen to Marni’s 911 call HERE.)

The restraining order reads like a young girl that was cold busted dropping off the letter and then was desperate to make up some sort of story to paint herself in a better light.

Here is a photo of the document – click to see a larger image. 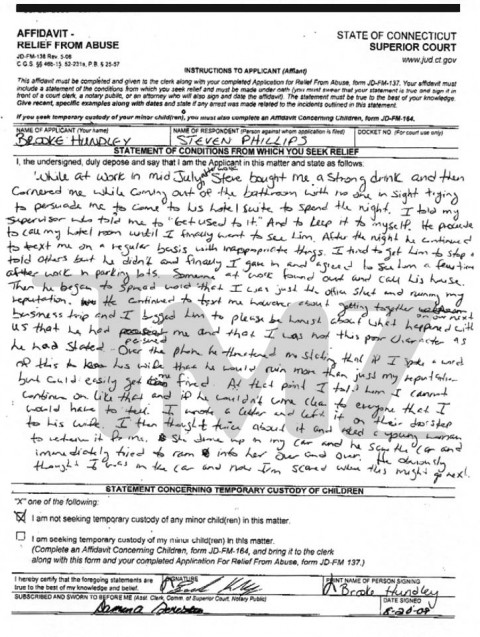 While at work in mid July, after work Steve bought me a strong drink and then cornered me while coming out of the bathroom with no one in sight trying to persuade me to come to his hotel suite to spend the night. I told my supervisor who told me to “get used to it.” And to keep it to myself. He proceeded to call my hotel room until I finally went to see him. After the night he continued to text me on a regular basis with inappropriate things. I tried to get him to stop and told others but he didn’t and finally I gave in and agreed to see him a few times after work or parking lots. Someone at work found out and call his house. Then he began to spread word that I was just the office sl*t and ruining my reputation. He continued to text me however about getting together on our next business trip and I begged him to please be honest about what happened with us that he had pursued me and that I was not this poor character as he had stated. Over the phone he threatened me stating that if I spoke a word of this to his wife that he would ruin more than just my reputation but could easily get me fired. At that point I told him I cannot continue on like that and if he wouldn’t come clean to everyone that I would have to tell. I wrote a letter and left it on their doorstep to his wife. I then thought twice about it and asked a young woman to return it for me. She drove up in my car and he saw the car an immediately tried to ram into her over and over. He obviously thought I was in the car and now I’m scared where this might go next.

I love this line: “I tried to get him to stop and told others but he didn’t and finally I gave in and agreed to see him a few times after work or parking lots.” How exactly did that conversation go?

Steve: How about just second base? Ha! Baseball joke!

Brooke. Very funny, but no.

Brooke: OK. But only a few times over the next few weeks out in the parking lot or possibly in a Wal-Mart bathroom.

It’s also interesting that she created a “friend” that was in the car at Steve’s house. “I asked a young woman…” LOL!

The real victim here is Marni Phillips. I suspect when she married Steve she had no idea he would someday be associated with the New York Mets.