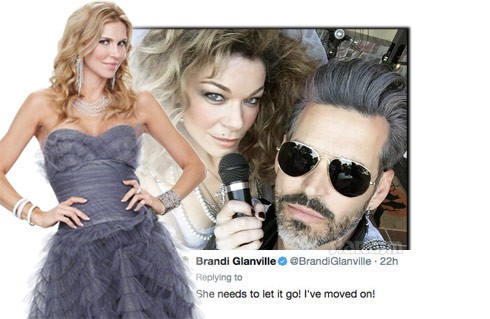 It was just a matter of time before the fallout ensued after Brandi Glanville once again aired dirty laundry about LeAnn Rimes.

There’s a whole bunch of shade to cover here so let’s get to it:

–> In an interview earlier this week an obviously ticked off Glanville predicted that Eddie Cibrian would divorce LeAnn in the next couple of years so he could get half of the singer’s money. She added that all parties would move on quickly because LeAnn hadn’t given Eddie any kids like she did.

–> The former Real Housewives of Beverly Hills star followed that up with a statement to The Dirty in which she accused Rimes of stalking her on social media. She said there was a lengthy history of disturbing behavior by LeAnn as she provided two recent examples.

She said she was invited to a magazine party but was told she was uninvited after Eddie and LeAnn requested that she be taken off the guest list just 3 hours before the event. She then accused LeAnn and her assistant of snooping on Snapchat, discovering where she would be eating, and then going to that restaurant at the same time to torture Brandi by eating with her two kids right in front of her in the disguise of celebrating “Step Mothers Day” a day too early.

Then, and this is where it gets loose even for these three who’ve had one of the most spiteful public feuds in recent celebrity history, Brandi produced “receipts” of her accusation to Instagram:

Brandi then did a bunch of Twitter replies in defense of her share, during which which she also accused LeAnn of acting “ridiculous” at her son Jake’s recent birthday party that they all attended.

Eddie, who left Brandi for LeAnn after he had an affair with the “Blue” singer while on the set of a Lifetime movie, followed up with his own receipts and a statement to TooFab.

He shared a text stream that appears to be between LeAnn and her assistant Kiki in which they made reservations at the restaurant in question days before they were alleged by Brandi to have stalked her Snapchat and devised the sabotage.

Eddie said in part, “I will not allow false and reverse accusations to go unanswered about my wife. LeAnn is a fantastic stepmom to the boys and is always gracious to their mother. Having to put up with Brandi’s made up drama all the time is extremely frustrating. After 8 years we should have one priority, making sure 2 incredible kids are loved and remain happy and healthy. But every couple of months there is another accusation coming from Brandi in an attempt to drum up drama to stay relevant.”

And THEN Brandi posited this question to Eddie on Twitter:

.@EddieCibrian then why is your wife watching my boyfriend's Snapchat? pic.twitter.com/GMEqRp0Uum

Brandi Glanville says Eddie Cibrian gave her HPV, claimed he got it from a lollipop