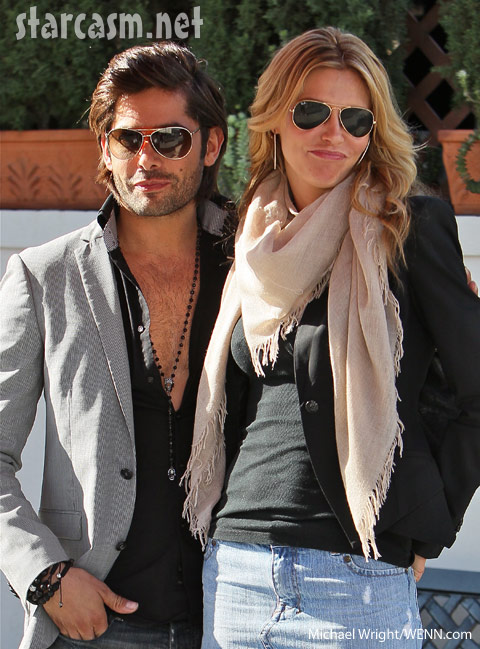 Cedric Martinez, who turned out to have been using Lisa Vanderpump and Ken Todd for their hospitality (and fame,) has moved on to another rich famous friend: Eddie Cibrian’s ex-wife Brandi Glanville.

Cedric was featured in the first Season of Real Housewives of Beverly Hills as restaurateur Lisa Vanderpump’s employee and houseguest. He told Kyle Richards a sob story on camera about his past in which he claimed he was a homeless son of a prostitute, never knew his father, and was abandoned by his mother at age seven.  Lisa’s husband Ken expressed his desire for the 37-year-old former model to finally sprout his wings and move out on his own, but every time Ken raised the issue, Cedric would protest that they were the only family he ever had.

It turns out that wasn’t true. They’ve come to find out that he has sisters, and he even threatened Ken with this little line that indicates that he was lying about not knowing his father:. Ken told US Weekly that Cedric said “The last time I was this angry, I stabbed my father.”

He also told Ken “I f**king hate your wife, and I hate you, and I hate your f**king kids.” Cedric also reportedly tried to blackmail them into giving him something (probably money) to prevent him from selling false stories to the tabloids.

It looks like the tables turned on Cedric in reguard to tabloid coverage and public opinion, but he’s now convinced Brandi Glanville to hire him as a part-time nanny.

Brandi says that they’ve known each other 16 years (Lisa knew him for 15,) and that they used to model together. Brandi told E!

He’s my gay best friend! I’ve known him for 16 years. We modeled together back in Milan and Paris and London back in the day.

“They boys love him. He’s going to be my manny for two days a week. He’s a great guy.”