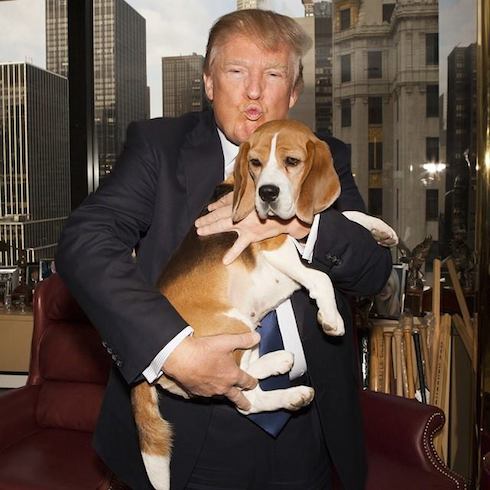 We’ve used several variations on the phrase “Donald Trump is having a rough week” to introduce articles on the real estate mogul over the past couple of weeks, but, as it turns out, Donald Trump is really just having an extremely bad time of things right now.

First, he announced his bid for the Republican nomination for president by insulting China, homosexuals, immigrants, Mexicans, and noted Canadian Neil Young, when he used Young’s song “Rockin’ in the Free World” without the Bernie Sanders supporter’s permission. (And when he implied that all Mexicans who cross the border into America are murderers and rapists.)

Then, he lost a major network’s support and damaged one of his most popular brands when Univision decided to sever its ties with the Miss USA pageant. Trump, defiantly, announced a $500 million lawsuit against the cable giant, but the whole fiasco resulted in a wave of bad press for The Donald.

Next, he came away from a CNN interview looking foolish (or worse) when he bungled a question about his belief in “traditional marriage.” “What’s traditional,” the interviewer asked, “about being married three times?” Trump didn’t have an answer, and the video went viral.

And then, in perhaps the most damning move of all, NBC canceled both the Miss USA pageant and  Trump’s reality show The Apprentice, in light of the continued fallout from his comments on Mexican immigrants. “Due to the recent derogatory statements by Donald Trump regarding immigrants,” the network’s statement read, “NBCUniversal is ending its business relationship with Mr. Trump.”

So what’s the latest blow to Trump’s image? Macy’s has decided to end its relationship with Donald Trump–today, the retailer announced it would pull all of his menswear from its stores. The company released a statement this morning saying it “stands for diversity” and was distressed enough by Trump’s original comments to sever all ties.

The company noted its ten-plus year relationship with Trump’s line of menswear, which made the sting of its removal that much sharper:

We are disappointed and distressed by recent remarks about immigrants from Mexico. We do not believe the disparaging characterizations portray an accurate picture of the many Mexicans, Mexican Americans and Latinos who have made so many valuable contributions to the success of our nation. In light of statements made by Donald Trump, which are inconsistent with Macy’s values, we have decided to discontinue our business relationship with Mr. Trump and will phase-out the Trump menswear collection, which has been sold at Macy’s since 2004.

But “Defiant” could well be Donald Trump’s middle name. Just an hour after Macy’s made its announcement, Trump released a statement saying that he had fired Macy’s, and not the other way around. Here’s a shot of the release, which is available on Donald Trump’s Facebook page: 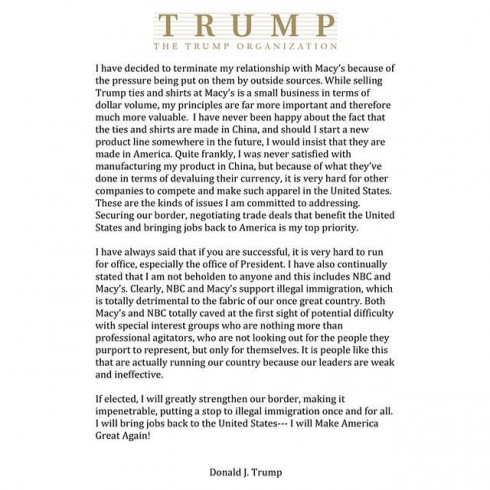 “I have decided to terminate my relationship with Macy’s,” the statement begins, “because of the pressure being put on them by outside forces. While selling Trump ties and shirts at Macy’s is small business in terms of dollar volume, my principles are far more important and therefore far more valuable.”

The statement goes on to note that the clothing is actually manufactured in China, and implies that it’s Macy’s fault the clothes aren’t made in America.

Trump goes on to accuse both NBC and Macy’s of supporting illegal immigration:

Both Macy’s and NBC totally caved at the first sight of potential difficulty with special interest groups who are nothing more than professional agitators, who are not looking out for the people they purport to represent, but only for themselves.

PHOTOS VIDEOS How many women have accused Donald Trump of sexual harassment?