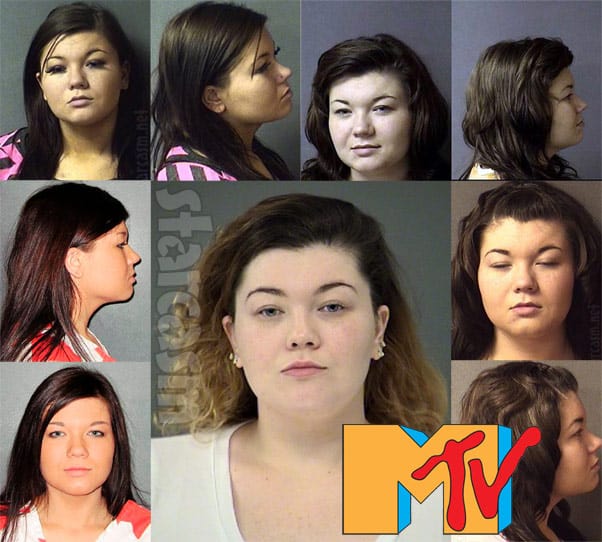 The fallout continues in the wake of a series of disturbing audio clips being leaked online in which Teen Mom OG star Amber Portwood can be heard in a rage as she threatens the life of her ex Andrew Glennon multiple times in the presence of their infant son James. The terrifying audio clips are a clear cut example of domestic abuse, and they have put Amber’s future on the show show in serious jeopardy. So, has MTV actually fired Amber Portwood from Teen Mom OG?

Despite numerous misleading reports online, MTV execs have reportedly NOT fired Amber — yet. The Ashley reported on Friday that MTV executives had a conference call on Thursday to discuss the situation with Amber, but a decision was not made during the call.

Just after the conference call, a second audio clip was posted by YouTuber Without a Crystal Ball on Friday. In that clip, Amber can once again be heard threatening Andrew’s life, and there is also audio of what sounds like Amber hitting Andrew while he was holding their son James — which is exactly what allegedly happened just prior to her domestic violence arrest in July.

The Ashley reports that producers were unaware of just how bad things were behind closed doors, and that they have tried to convince Amber to check herself into a facility. “They want to get her help and send her to a facility, possibly the one Catelynn [Lowell] went to, but right now Amber does not feel that she has a problem, so not much can be done,” The Ashley’s source says.

Since her post on Friday, The Ashley has continued to respond to inquiries on Twitter about whether or not Amber has been fired. Her most recent response was moments ago, when she once again assured everyone that Amber had not been fired:

Again, Amber has NOT been fired. She hadn't been fired when that video was posted and she STILL hasn't! If that changes, I'll of course let you guys know! 🙂

At this stage, I simply cannot imagine a scenario in which Amber Portwood is not fired from Teen Mom OG. Given a similar situation, the network could make it work by focusing on the abusive cast member’s struggle with coming to terms with his or her anger management issue, but this has been played out so many times with Amber over the past decade that I don’t think viewers would buy into it at all. Plus, Amber is so obsessed with only presenting her issues in the context of her being such a strong person having to live with them, that I do not believe she would allow them to tell the story that would have to be told in order for viewers to accept her remaining on the show.

There is also the legal aspect. Amber is currently facing felony charges in addition to being in a custody battle for her son. There’s no way her attorney(s) would allow her to admit to being abusive on national television. Then again, this is the same person who chose to go to prison instead of entering a drug rehab program.

The fact that Amber hasn’t been fired yet is major topic of discussion online because it highlights a clear double standard when it comes to domestic violence and the sex of the abuser and victim. Just imagine if MTV had a show called Teen Dad focusing on the lives of four teenage boys who became fathers. If one of those guys clearly had rage issues and was actually sent to prison for domestic violence (in front of a child no less), I do not believe MTV would have allowed him to return to the show.

But, if MTV did allow him to return, and he continued to exhibit these rage issues, and he was arrested for domestic violence again (in front of a child again), the network would have severed ties immediately. (That would have happened even without all the machete allegations, etc.)

Fast forward a few months and audio surfaces of the man threatening to kill his wife multiple times (in front of a child again) — does MTV hesitate to make a statement severing ties with him? Absolutely not.

The double standard also applies to the cast. Maci McKinney, Catelynn Baltierra, and Cheyenne Floyd all showed up in court to support Amber. Would guys like Gary Shirley, Tyler Baltierra and Corey Wharton have done the same for a male co-star in a similar situation?

#TeenMomOG Amber Portwood was in court today for a custody hearing stemming from her domestic violence arrest and her co-stars @CatelynnLowell @MaciBookout & @itskcheyenne were there with her to show support! As were @MTV producers & @ItsGaryTime. https://t.co/lLzs3ZxgMX

I won’t even go into Amber’s numerous online rants over the years in which she made controversial comments like this one regarding domestic violence: 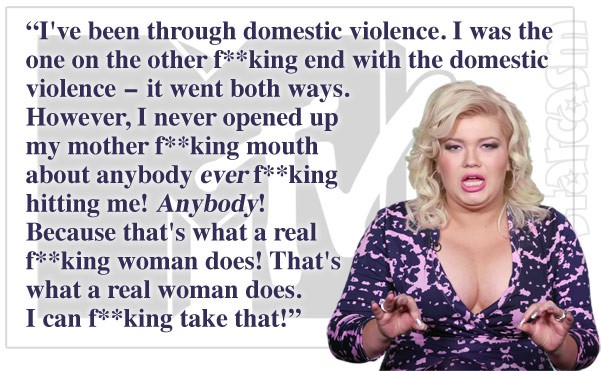 We will continue to monitor the story and will update as soon as we get a statement from MTV about Amber.