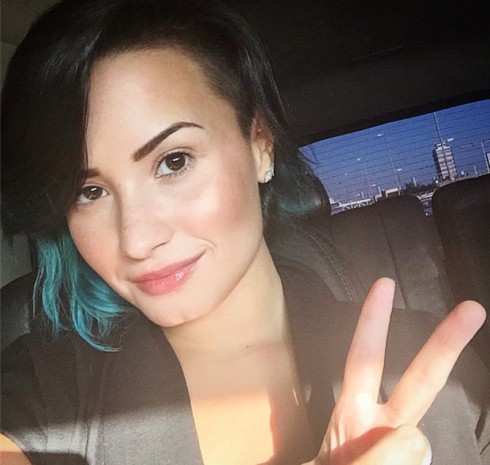 After seeking treatment in 2010 for an eating disorder, Demi Lovato has emerged as one of the most vocal advocates for body acceptance and mental health awareness. Still — like most who’ve dealt with eating disorders — Demi occasionally struggles to stay on track.

“It’s been difficult. I almost went back to rehab for my eating disorder last summer. I was obsessing over food and terrified of it at the same time,” she told Fitness. Fortunately, she said boyfriend Wilmer Valderrama noticed she was sliding back into old habits. She also credited her health to not having ‘a lot of yes-people’ around her.

Now, Demi follows a structured meal plan and works out regularly with opening artist Christina Perri. Unlike in the past, she gets “excited about seeing muscles instead of bones.”

“I realized I’d rather be strong and happy than be what society thinks is thin and perfect and be miserable,” said the “Really Don’t Care” artist. “I’ve learned to appreciate my body for what it is. It helps to remind myself how far I’ve come. I recently saw pictures from my first tour, and I spent that whole summer performing in the heat in a red leather jacket because I was ashamed to show my arms. And that was when I was 105 pounds! This tour, I’ve had the confidence to show my arms at every single concert. It may seem like a small thing, but for me, that’s huge.”

Although she said she still has “problem areas,” Demi said she recognizes that’s what makes her human: “I can’t change that, and obsessing over it will only make me miserable. Learning to be grateful for our bodies and taking care of them are the best ways for us to empower ourselves physically, mentally, and spiritually.”