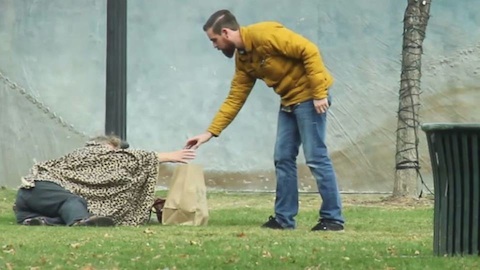 A Utah man is winning the hearts and minds of many this holiday season with his story of simple kindness.

Matt Tribe, 28, of Ogden UT, bought himself Olive Garden’s infmous unlimited pasta pass for the period beginning September 22 and ending November 9. Tribe considers himself a “casual Olive Garden customer,” and didn’t get the pass so he could bog himself down in carbs.

In his own words, Tribe began making twice-daily distributions from his local Olive Garden because

I thought it would be cool to share with other people. Everything in the world is so negative, and in my own life, if you’re having a hard time, just doing nice things you forget all about it and it brightens you up. I thought, ‘Wouldn’t it be cool to do random acts of pasta?’ When someone sends you food, nobody’s pissed! They’re always happy.

At first, Tribe shared the meals with his family and friends, and documented their reactions on his website, Random Acts of Pasta.

(Side note: Utahns, Tribe says downtown Salt Lake City’s is the worst Olive Garden he visited, by a huge majority. Care to weigh in?)

Before the pass expired, though, Tribe found himself feeding ten different homeless people on the regular. And their reactions sometimes gave him pause:

Olive Garden was not a part of Tribe’s good deeds, but applauded his efforts nonetheless. As for Tribe, he says the hundreds of meals and thousands of miles put on his car helped him better understand why people dedicate themselves to serving others, and that it’s a part of his own life he intends to change.