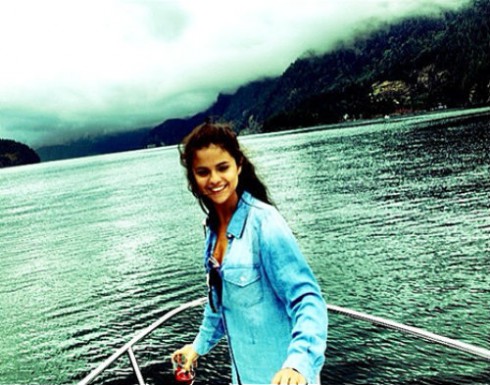 “I’ve done everything I could to the best of my ability. Thank you for the unconditional love and cyber hugs. You inspire me,” she said on Feb. 10. It’s a nice message, but the accompanying picture (shown at top) of her seemingly holding a drink is a

Many were surprised when reps revealed Selena went to a residential rehabilitation facility for two weeks in January. Although the official word was that Selena was seeking help for substance abuse, other sources said she was drinking too much and experimenting with drugs. One insider added Selena was a “bad influence” on Justin Bieber. Selena’s doctors were reportedly opposed to her leaving the 6-week treatment program after just two weeks.

In any case, it seems Selena was proactive about addressing issues (or burgeoning issues) and she deserves some credit for that. As BFF Demi Lovato said in a tweet from Feb. 5, “Weakness is living in denial. Only the strongest people ask for help.”

VIDEO Justin Bieber and Selena Gomez seen together in public; are they getting back together?

Zac Efron thanks everyone for support about his rehab news