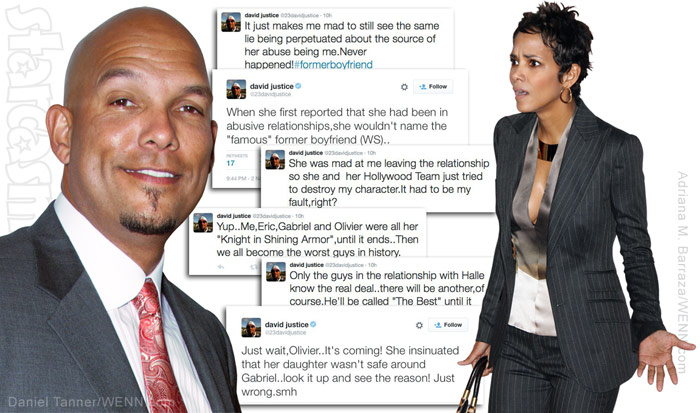 It looks like there may be a great new VH1 reality show concept taking form as the future stars of Halle Berry’s Exes are coming together to speak out against the Academy Award winning actress after she recently filed for divorce from her husband of two years, Olivier Martinez.

All of the drama requires a bit of context. In 1996, Berry revealed to People in 1996 that she had a violent episode with an ex-boyfriend while filming Last Boy Scout. The boyfriend is only described as “someone well-known in Hollywood.” Here’s the excerpt:

Unfortunately, not all her encounters with men were so amiable. For years, Berry says, she’d been on the receiving end of manipulation and deceit in relationships. By 1991 a failed romance with actor Wesley Snipes left her “crying all the time,” says a production assistant who worked with Berry on Strictly Business. But the unhappy pattern, Berry says, took a violent turn during the filming of Boy Scout. A boyfriend she refers to as someone well-known in Hollywood hit her so hard her left eardrum was punctured; she lost 80 percent of her hearing in that ear. “I left so fast there were skid marks,” she says. “It never happened to me before—or since.”

The next paragraph begins with:

As Berry saw it, her whole world changed when she met Justice several months later. She was shooting the HBO miniseries Queen in Charleston, S.C., in February 1992 when she spotted the outfielder on TV in an MTV celebrity baseball game.

Despite the timeline obviously eliminating David Justice as the one who hit her, he is still sometimes connected to the incident. That connection was apparently erroneously made again in recent reports about Halle’s current divorce from Olivier, and that set David Justice off yesterday. 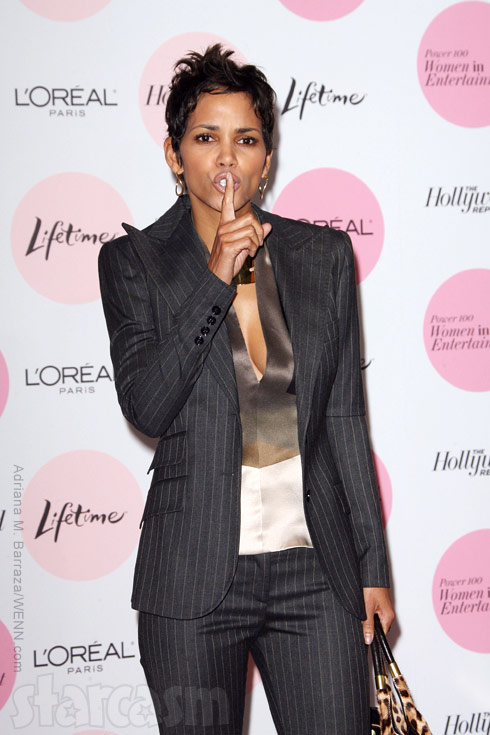 Here are his tweets, most of which have since been deleted, in chronological order. (Notice that David uses the initials WS numerous times, implying that it was Wesley Snipes who hit Halle.)

Reading the latest Halle Berry Reports,it wasn’t me who hit Halle causing the ear damage.Halle has never said that I hit her.

It was a former Hollywood boyfriend (WS) that she told me ! #getyourfactsright

When she first reported that she had been in abusive relationships,she wouldn’t name the “famous” former boyfriend (WS)..

She was mad at me leaving the relationship so she and her Hollywood Team just tried to destroy my character.It had to be my fault,right?

Yup..Me,Eric,Gabriel and Olivier were all her “Knight in Shining Armor”,until it ends..Then we all become the worst guys in history.

Only the guys in the relationship with Halle know the real deal..there will be another,of course.He’ll be called “The Best” until it ends.

Just wait,Olivier..It’s coming! She insinuated that her daughter wasn’t safe around Gabriel..look it up and see the reason! Just wrong.smh

It just makes me mad to still see the same lie being perpetuated about the source of her abuse being me.Never happened!#formerboyfriend

Another of Halle Berry’s exes, Eric Benet, responded to David’s tirade by tweeting, “My man at @23davidjustice is tweeting some truth dis’ mornin’!”

Sources close to Halle Berry spoke with TMZ and reveal that she is upset that David Justice called her out publicly, and she insists that she never said he was the one who hit her and caused partial deafness in one of her ears.

David Justice has since returned to Twitter to sort of apologize and explain why he spoke out against Halle and any misconceptions about him being an abuser:

I just want to thank Halle for finally squashing all of the rumors in the past, that I had physically abused her, causing the hearing loss. My intention was not to bash Halle, as I specifically said that Halle has NEVER verbally said it. I just wished that when the rumors were out she could’ve squashed them at that time. I have 3 kids and a wife for 15 years.It was important that my kids knew that their dad didn’t do what has been so regularly reported over the years. Now that Halle has confirmed the truth, I will go back to my coaching and mentoring the kids in my community, coaching baseball, football and basketball. Say what you want about me because I’m far from perfect, but don’t say that I hit Halle. My mom didn’t raise me that way. Now, I’ll go back into my little small place on this earth and be quiet….Peace!

Well, it seems there is peace in the Halle valley for now.

(On a side note, when I threw out the idea of a Halle Berry Exes reality show, I was just joking. I’m starting to realize I would watch the HELL outta that show! Especially if David, Olivier and Eric could get Wesley to sign on! Of course Wesley would be the Danielle Staub of the group lol.)