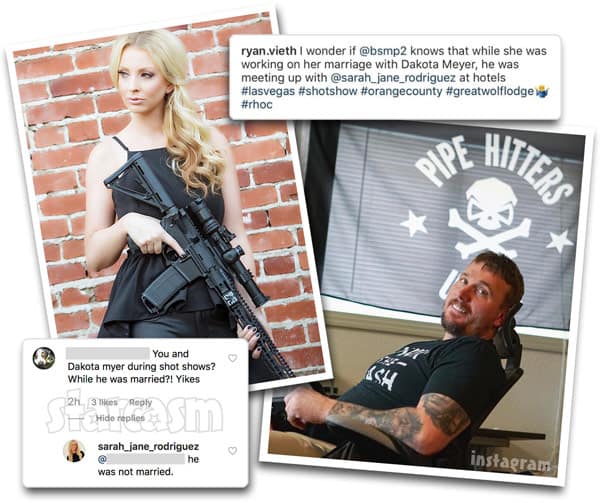 Thanks to the escalating social media feud between Tamra Judge’s son Ryan Vieth and his ex Sarah Rodriguez, we have a salacious OC/OG crossover! After Sarah shared a series of threatening text messages from Ryan on Instagram, he responded with accusations that Sarah and former Teen Mom OG dad Dakota Meyer were having gun show hotel hook ups! While Dakota and Bristol Palin were still working on their marriage!

Ryan shared side-by-side images of Dakota and Bristol and tagged Bristol in his accusatory caption: “I wonder if @bsmp2 knows that while she was working on her marriage with Dakota Meyer, he was meeting up with @sarah_jane_rodriguez at hotels.” Ryan concluded with a string of hash tags that revealed more details: #lasvegas #shotshow #orangecounty #greatwolflodge #rhoc

If you’re like I was and have no idea what Ryan meant by Shot Show, Wikipedia explains that it is “an American annual tradeshow for the shooting, hunting, and firearms industry.” The yearly gun show is now held every January in Las Vegas.

Sarah responded to Ryan’s accusation by seemingly confirming that she has intimate knowledge of Dakota’s weaponry, but only after his divorce from Bristol was finalized late last year: 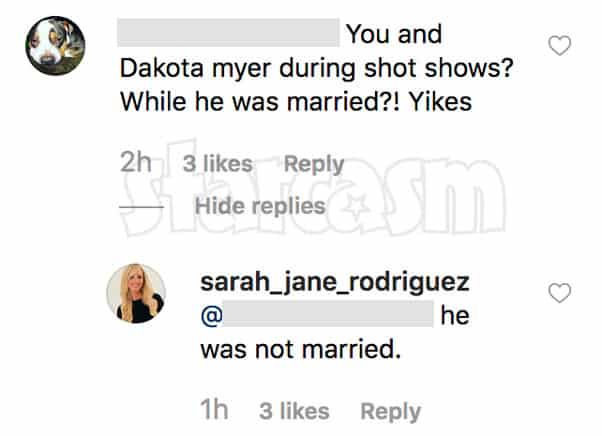 According to their Instagram accounts, both Dakota and Sarah were in attendance at the 2019 Shot Show. However, if Dakota and Bristol were still “working on their marriage,” then that would mean the alleged Shot Show shenanigans happened prior to this year’s event. Judging from Sarah’s Instagram account, it doesn’t appear that she was at the 2018 Shot Show.

Sarah also responded to Ryan’s post by accusing him of sleeping with another woman. “Tell that to the tweeter @miss_tee_light_ that you had in our daughter’s bed,” Sarah wrote.

Ryan shared a series of text graphics in his Instagram story in which he claims that Sarah posted the text messages after he found out she was “hanging out with” another man. That wouldn’t normally be an issue for a divorced couple, but Ryan implies the two were back together — or at least that “she was just in my bed two days ago.” He also promises that he will be posting a video soon explaining his side of things in full.

Let me tell everybody something, there’s always two sides to every story. I keep my mouth shut for my daughter’s sake and because I like to keep my life as private as I can. I don’t play the media for sympathy. For everyone that wants to judge me for the chaos that was created yesterday please feel free to contact me. There’s a lot about our life that people don’t know and I’m here to set the record straight.

I will be doing a full video statement to clear my name and expose the truth about my life and our situation.

And for the Bravo fans, this season is my last. I will never be apart of this show, the money isn’t worth having all this chaos around my daughter. I am a very simple person and my life isn’t worth talking about.

100% pre meditated because she got caught hanging out with a man that day and I told her I didn’t want to be with her anymore. If I’m so horrible, violent and mean then why was she just in my bed 2 days ago ??‍♂️ Clearly causing all this chaos because she knows how to
Play the media.

Ryan also posted some of his own text message exchanges with Sarah just prior to her text message posts — which included a photo of a bullet and Ryan stating: “F**K YOU!!!!!!!!!!!!!!!!!! This one is for you.” Here are those: 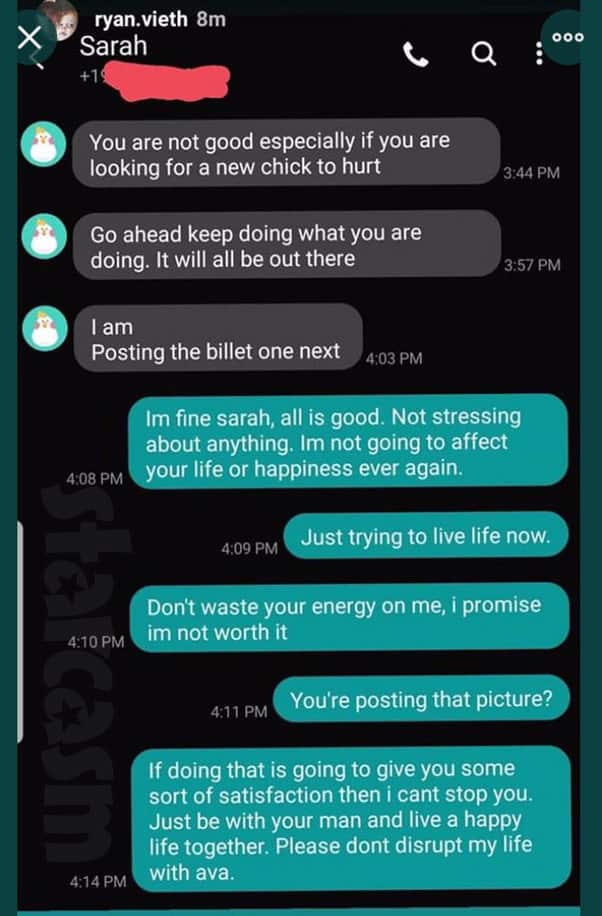 So far, neither Bristol Palin nor Dakota Meyer have responded to Ryan’s claims. The Twitter account that Sarah mentions appears to have been deleted, but there is an Instagram account under the same ID for a very attractive female model. It’s unclear if it is the same person.

We will keep an eye out for Ryan’s video. Stay tuned!

UPDATE – Things have escalated dramatically! Get all caught up with the link in the tweet below:

#RHOC The heated custody dispute between Ryan Vieth & ex Sarah Rodriguez continues. Get a FULL RECAP of all the crazy developments today, including a live stream at Sarah's house with police, Tamra's alleged intervention, plus Ryan & Sarah's deleted posts! https://t.co/tnAcw4RZ3a

Who is Real Housewives of Orange County’s Sarah Winchester?